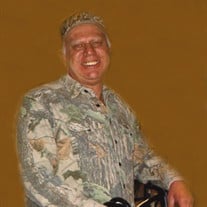 Aaron (Ziff) Orf, 65, of Columbia, Missouri passed away peacefully in his sleep on Friday, May 20, 2022, which was the only time he did anything peacefully. Funeral services for Aaron will be held Thursday, May 26, 2022 at 10:00 a.m. at Bibb-Veach Funeral Homes & Crematory with Fr. Henry Ussher officiating. Burial will be in St. Clement Cemetery. Visitation hours will be held from 5:00 p.m. to 8:00 p.m. on Wednesday, May 25th at the funeral home. Aaron was born June 10, 1956 to James Andrew and Vera Ilene (Nelson) Orf in Louisiana, Missouri. He was the sixth of thirteen children, and as his dad said at the time, he was the ugliest. That was until his brother, Dwight, came along a few years later and claimed the title. Having been raised on a farm, Aaron was an expert with many skills. Many of these skills he learned through hands-on experience while skipping school with his brother, Jeff. Most of this went unnoticed by his parents because the boys had paid off their sisters, Barb and Shari, instead of getting on the bus. The girls only charged them ten cents per lie for each escapade. Unbeknownst to the boys, the sisters were charging each of them. These adventures got a lot more expensive when brother, Duane, caught them hiding in the hay loft. To this day Duane refuses to admit how much they paid him; however, he did buy a new truck soon after. As Aaron got older, he enjoyed many activities. One of these was attending rock concerts in full regalia—tie died shirts, ragged jeans, and long hair. Aaron said it was never his idea to hitch-hike there; it was always brother, Ron’s, which was one of the many things he blamed Ron for. They never told their sister, Pam, how they got to these concerts because they were trying to con her into being their Uber driver. Of course, she said no because, after all, she was smarter than the two of them combined. Aaron always considered himself a role model with an incredible knowledge of the English language. One of the biggest accomplishments was teaching his baby brother, Scott, new vocabulary words. We know this to be true because once, when their sister, Paula, was home, mom was proud to inform her that Scott could now say “duck.” Paula did not have the heart to tell mom that he wasn’t saying “duck.” His baby sister, Valerie, however, had learned from her older sister, Pam, and at three years old, was already smarter than Aaron. One of a few of Aaron’s shortcomings was patience. For example, his younger sister, Pat, who was handicapped, loved her purse; and like most women, put everything in that purse. Unfortunately, it was usually Aaron’s car keys. Then the truth came out where Scott had actually learned those new vocabulary words. When he finally wrestled the car keys away from Pat, he was in a hurry to get into trouble, so off he went “like a bat out of hell”. He was an excellent driver, having learned how to drive on two wheels from his older sister, Sandy. After Aaron finally grew up and decided to make something of himself, he resided in the Columbia area most of his adult life. He worked for the University of Missouri Housing and Maintenance Department and Rust & Martin Interior Design for many years. He got married, and his biggest accomplishment and joy of his life was the birth of his only child, Matthew. He was a very proud and doting father and remained so until he died. Aaron is survived by his son, Matthew Orf (Jacqueline) and their son, Nathan, of Tampa, Florida. Aaron is also survived by siblings: Paula (David) Hester of Ottumwa, Iowa, Duane Orf of New Hartford, Pam O’Donnell of Phoenix, Arizona, Jeff Orf of Bowling Green, Barb Shinn of Bowling Green, Dwight (Tammy) Orf of New Hartford, Shari Tullock of Troy, Missouri, and Valerie (Joe) Edwards of Chattanooga, Tennessee; along with numerous nieces and nephews. He was preceded in death by his stillborn daughter; his parents; and siblings: Sandy Orf, Ron Orf, Patricia Orf, and Scott Orf. Pallbearers will be Matthew Orf, Dwight Orf, Cass Shinn, Tyson Geissert, Dustin Tullock, Drew Orf, Cole Shinn, and Shane Orf. Honorary pallbearers will be brothers, Duane and Jeff Orf; nephews, Ashley Holtsman, Travis Shinn, and Jason Orf; and his very good friends, Ray (Bucky) Long and Bob Stegall. Memorials may be made to the St. Clement Cemetery Association or the Bowling Green Cancer Park. Online condolences may be left at www.bibbveach.com.

Aaron (Ziff) Orf, 65, of Columbia, Missouri passed away peacefully in his sleep on Friday, May 20, 2022, which was the only time he did anything peacefully. Funeral services for Aaron will be held Thursday, May 26, 2022 at 10:00 a.m. at Bibb-Veach... View Obituary & Service Information

The family of Aaron Orf created this Life Tributes page to make it easy to share your memories.