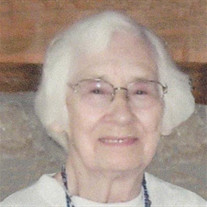 Alberta “Pat” Robinson, age 95 of Louisiana formerly of Bowling Green passed away December 10, 2017 at the Maple Grove Lodge in Louisiana. Funeral services will be held 3:30 p.m., Friday, December 15, 2017 at the Bibb-Veach Funeral Home in Bowling Green with Rev. Don Amelung officiating. Burial will be in the Memorial Gardens Cemetery in Bowling Green. Visitation will be held 2:30 – 3:30 p.m., Friday at the funeral home. Pat was born July 7, 1922 in Bowling Green to James E. and Margaret E. Griffith Patrick. She married William C. Robinson on July 16, 1951. They traveled extensively in the U.S. including Hawaii. He preceded her in death October 22, 1992. Survivors include two sisters Mary Ruth Williamson of Bartlesville, OK; and a host of nieces, nephews and friends. She was preceded in death by her parents; six brothers Fredrick Marion, Earnest Robert, Carl Everett, James Wiley, Arthur Otis and John Washington Patrick; three sisters Winfred Elizabeth Patrick, Edna Anna Endres and Emma Colbert; also a host of nieces, nephews and friends. She was a member of the Second Baptist Church of Bowling Green, joining the Church in April 30, 1933. She graduated from Bowling Green High School in 1941. Pat excelled in basketball being on the first team her freshman year. She also played on the Bowling Green Team that helped win 69 consecutive games before losing. She was “All Star” captain of the Bowling Green Tournament her Junior Year and Captain of the Bowling Green Team her Senior Year. After graduation she worked at the Bowling Green Times for 12 years from 1941 to 1953. She then worked at the ASCS office for 22 years, retiring in 1975. Pat joined the ladies VFW Auxiliary Post 5553 in 1949 and is now a member of 65 years continuous membership. She served in various offices and served as President three times and still attends whenever possible. Pat joined the Rebekah Lodge in 1952. She went thru the Chairs and was Noble Grand and later was District President. Pat also served on the board of the Bowling Green Towers for 20 years. She spent her entire life in Bowling Green except for the last few years in Louisiana. Pallbearers will be Bob Patrick, Jim Robinson, Larry Patrick, W.L. Robinson, Rex Syrcle and Terry Patrick. Memorials may be made to the Arthritis Foundation or to the Bowling Green Alumni.

The family of Alberta "Pat" Robinson created this Life Tributes page to make it easy to share your memories.

Send flowers to the Robinson family.