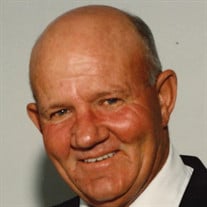 Allen Ernest Seeger, 93, of Silex, Missouri, passed away on Monday, January 25, 2021 at his home in Silex. He was born on April 4, 1927 to Ernest Chris and Evelyn Katherine Hackmann Seeger in Ladue, Missouri. He was united in marriage to Mary Ellen Queathem on August 29, 1948 at St. John’s United Church of Christ in Chesterfield, Missouri. They were married for 71 years before Mary Ellen preceded him in death on September 12, 2019. Mary Ellen was the love of his life. Allen grew up in Ladue, Missouri and was a farmer his entire life and loved International Harvester equipment. He loved quarter horses and they were an important part of his life. As a young man he broke horses and would ride the trails between the St. Louis Country Clubs which included Deer Creek Country Club. He attended Clayton High School and enlisted in the United States Navy when he was 17 years old, serving from February, 1945 to August, 1946. Upon returning from the military, he began farming. He and Mary Ellen started their farming career in Troy, Missouri and then in 1956 he and Mary Ellen bought their farm in Millwood, MO where they raised their five daughters. Allen also enjoyed operating a bulldozer to provide for his family. He loved his family and loved spending time with them. He also enjoyed the years of riding four wheelers with friends, playing cards, and attending the many dances in Millwood with wonderful friends. He became interested in model train sets and spent lots of hours building out his train set. Allen loved to have fun. Allen is survived by his five daughters, Kathy (Nick) Allen, Debbie (Jimmy) Angel, Connie (George) Willer, Carol (Steve) Mudd, and Sharon (Terry) Mudd; 14 grandchildren; Rich Allen, Robbyn (Mike) Eggering, Nick L. (Carrie) Allen, Scott (Jamie) Allen, Kyle (Katie) Allen, Nichole (Stephen Mollerus, Kristen (Todd) Reinhardt, Brad Angel, Andrea (Dale) McDonald, Kim (Russell) Mustin, Amanda (Brett) Fisher, Amber (Luke) Carden, Michael (Jackey) Mudd, and Jeni (Justin) Ray; 27 great-grandchildren, 13 great-great-grandchildren; sister-in-law Peggy Queathem; and many nieces, nephews, and cousins. He was preceded in death by his wife, Mary Ellen Seeger, his parents, Ernest and Evelyn Seeger, and his two brothers Glenn E. Seeger and Donald H. Seeger. Memorial services for Allen will be Thursday, January 28, 2021 at 1:00 p.m. at the Silex Presbyterian Church in Silex, Missouri. Rev. Lew Kimmel will be officiating. Burial will be in the St. Alphonsus Cemetery in Millwood, Missouri. Visitation for Allen will be from 10:00 a.m. to 12:30 p.m. on Thursday at Bibb-Veach Funeral Home in Silex. Serving as honorary pallbearers will be Nick Allen, Jimmy Angel, George Willer, Steve Mudd, Terry Mudd and Bill Schlote. In lieu of flowers, memorials may be made to the Silex Presbyterian Church.

Allen Ernest Seeger, 93, of Silex, Missouri, passed away on Monday, January 25, 2021 at his home in Silex. He was born on April 4, 1927 to Ernest Chris and Evelyn Katherine Hackmann Seeger in Ladue, Missouri. He was united in marriage to Mary... View Obituary & Service Information

The family of Allen Ernest Seeger created this Life Tributes page to make it easy to share your memories.

Allen Ernest Seeger, 93, of Silex, Missouri, passed away on Monday,...

Send flowers to the Seeger family.