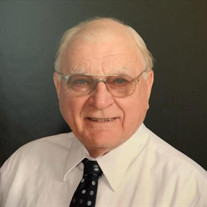 Aloys (Al) Anthony Deters, age 87, of St. Charles passed away April 23, 2020 at St. Peters Manor in St. Peters, MO. A private graveside service will be held at St. Clement Catholic Cemetery with Fr. Henry Ussher officiating. Bibb-Veach Funeral Home will be handling the arrangements. Al was born at home on August 29, 1932 in Bowling Green Missouri, the son of A. J. and Eugenia Deters. He married Betty Jon Morris of Curryville at St. Clement Catholic Church on November 18, 1953. She survives. Other survivors include sons, Steve Deters of St. Charles (Jeanie); Tom Deters (Jessica) of St. Charles; and one daughter, Lois Van Boening (Mike) of St Charles; and daughter-in-law, Carol Deters of Bowling Green; along with many grandchildren and great-grandchildren. He is also survived by his brother, Don Deters (Gerry) of Arnold; and four sisters; Blandina Spitznagle of Kirkwood; Carolyn Henrichsen of Bowling Green; Juliana Brown of Bowling Green; Claire Hayes (Phil) of South Bend, Indiana; and sister-in-law Anna Deters. He was preceded in death by his parents; his brother Michael Deters, and son John A. Deters Al lived most of his life in St. Clement, where he attended grade school and the parish two year high school. He graduated from Bowling Green High School in 1950. After graduation he attended the University of Missouri where he was a member of Alpha Gamma Rho fraternity. He served in the United States Army. He was a lifelong farmer and was a former postal carrier. He was very active in the parish and the school. He had a great interest in sports and in the development of youth, working as a coach to St. Clement basketball teams and as a Khoury League manager. He served a long period of time as the Youth Director for the St. Clement Squires youth organization and in later years became a bus driver for the school. Al was a lifelong member of the Knights of Columbus Council 1928, and a 4th Degree member. He was also an active member in the community who served on the Board of Directors for Farm Bureau and was a member of the Pike County Pork Producers. Al’s hobbies included square dancing, catching a St. Louis Cardinals baseball game on the air or on television. He was known for his blue eyes and a laugh that could be heard around the room. He loved being on his farm. Most of all, he enjoyed spending time with family and friends. Memorials may be made to St. Clement School or St. Clement Cemetery Association. Online condolences may be left at www.bibbveach.com

The family of Aloys "Al" Anthony Deters created this Life Tributes page to make it easy to share your memories.

Send flowers to the Deters family.