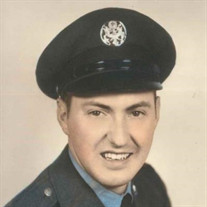 Alvin “Pete” Groshong, age 88, of Troy passed away June 28, 2019 at the Elsberry Health Care Center in Elsberry. Funeral services for Alvin will be held 10 a.m., Wednesday, July 3, 2019 at the Millcreek Baptist Church in Silex with Pastor Barrett Dodd officiating. Burial will be in the Millcreek Cemetery with military rites conducted by the VFW Post #5553 and the Missouri Military Honors. Visitation will be held 4:00 - 8:00 p.m., Tuesday, July 2, 2019 at the Bibb-Veach Funeral Home in Silex. Alvin was born March 23, 1931 the son of Charles Headley and Vera Belle Weeks Groshong, the youngest of six children near Briscoe on the Week Home place. He married Ruby June Hilton March 24, 1967 in St. Charles. She survives. Other survivors include sons Alvin Keith Groshong (Denise) and Charles Scott Groshong (Trecia); six grandchildren Kayla Norton (Ryan), Wyatt Groshong, Colton Groshong, Chase Groshong, Austin Groshong (Kelcie) and Sarah Groshong; and niece Carol Wilp. He is preceded in death by his parents; brother Charles Groshong (Iva); sisters Helen Wilp (Karl), Edith Chambers (Elmer), Doris Groshong, and Alberta Momphard (Ray). He walked 2 miles with 2 sisters to Auburn Country School, then after the family moved to rural Winfield he attended Lindsey Country School and graduated from the Winfield High School. After High School he served in the United States Air Force in Korea during the Korean Conflict in the field of communication. Finishing the night shift, he was helping uncrate bombs when the news came in about the treaty being signed. He then was sent back to Smokey Hill Air Force Base to finish his service. He had several jobs including construction, survey crews, McDonnell Air Craft, Railroad, and retired in 1993 from Ferrell Gas Company. Alvin learned to play music early in life and at age 6 played the mandolin, and pursued the guitar later because his hands were to small to reach around the neck of the guitar. He joined his first band at age 14. He and his brother and Dad would play and sing at school functions, pie suppers and other gatherings. He played music and sang in several bands from the age of 14 and up as well as during his 4 years in the Air Force building the morale of his home sick buddies. After service he continued to play in bands and has passed the music down to his children and grandchildren. Alvin also enjoyed reading history books and was proud to be the 3rd great grandson of Jeremiah Groshong the 2nd settler in Lincoln County who built the 2 mills in Moscow Mills and the 2nd great grandson of Jacob De Clement Groshong, the 1st white child born in Lincoln County , MO. Alvin was a member of Corinth Christian Church where his son Scott is now the pastor. He was a loving, faithful husband, father and grandfather. Pallbearers will be Jason Owen, Ryan Norton, Wyatt Groshong, Colton Groshong, Chase Groshong and Austin Groshong. Memorials may be made to the Millcreek Baptist Church, Millcreek Cemetery, or the Corinth Christian Church Mission Fund or donor’s choice.

The family of Alvin "Pete" Groshong created this Life Tributes page to make it easy to share your memories.

Send flowers to the Groshong family.