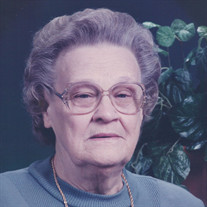 Annie Elizabeth Straube (1922-2019) Long time Bowling Green resident Annie Dieckmann Straube passed away on Monday, April 29th in Countryview Nursing Home in Bowling Green. Visitation will be Saturday May 11, 2019 from 9:30-11:00 at the Second Baptist Church in Bowling Green with the service immediately following. Interment will be at Memorial Gardens Cemetery next to her husband Scott in the family plot. Annie was born November 7, 1922 to John Henry and Annie Neumann Dieckmann. In her youth, her family moved to Pike County where she attended Butler School. She was a member of the Farmer Farmerette Club and enjoyed attending the local dances where she met Walter Scott Straube who played the fiddle. They married in l942. One of her first jobs was a waitress for Confederate Cottage Hotel in Bowling Green. The couple briefly moved to St. Louis and Hillsboro, Illinois where Scott worked for the Bridges Asphalt Company. They returned to Bowling Green where they raised their 7 children. In June 1951-1958, she and Scott operated the Pike County Rest Home(later called Moore-Pike Nursing Home) before settling on a small farm on the outskirts of Bowling Green. During those years, she served as a cook with the Bowling Green School District. In 1962 Scott and Annie purchased the Butler Pritchett Funeral Home and converted it into the Straube Boarding Home, which they ran until their retirement in l987. After they retired, she and Scott enjoyed travelling to visit their children in Virginia, Kentucky, Wisconsin, and Alaska. One of the family’s favorite gatherings was celebrating their golden 50th wedding anniversary in Kentucky in l992. Several years after her husband’s passing in l993, Annie moved to Wellsville but returned to Bowling Green a few years later where she remained until her passing. She was a gifted quilter, and enjoyed needlework and porcelain china painting. Annie was an accomplished cook and baker, and was a care-giver for many years operating the Boarding Home business and raising their seven children. In addition to spending time with her children and their families, her favorite past-times were playing cards and bingo with her friends, and trips to the casinos. She was a member of the Second Baptist Church in Bowling Green and remained strong in her faith throughout her life. She was preceded in death by her husband Scott; her sons Scott Jr, Bob, David, and Jerry Straube; her daughter Rosetta Pagnella; son-in-law Chad Drennan; and grandson Troy Cashman; her brothers Ben, John, and Eli Dieckmann; and sister Hilda Evans. She is survived by her two daughters Karen (Bill) Corbus of Juneau, Alaska, and Joyce Roloff-Kroft (Doug) of Crested Butte, Colorado; Daughter-In-Law Barb Straube; Grandchildren Brian Pagnella, Nicole (Dave) Jensen, Laurie (Craig) Heckman, Neil Straube, Nathanial and Dylan (Gisele) Roloff, Booker Drennan, Dean and Scott Diddell; Great-grandchildren Kennedy Jensen, Aiden and Hailey Heckman; her sister Lillie Straube of Bowling Green, and numerous nieces, nephews and extended family. Serving as pallbearers will be Brian Pagnella, Dylan Roloff, Dean Diddell, Robert Evans, Jason and Seth Straube. For anyone interested in making a memorial donation, the family suggest the Second Baptist Church (319 W. Church, Bowling Green, Mo 63334) or the Home Care and Hospice (#1 Health Care Place, Bowling Green, Mo. 63334)

The family of Ann Elizabeth Straube created this Life Tributes page to make it easy to share your memories.

Send flowers to the Straube family.