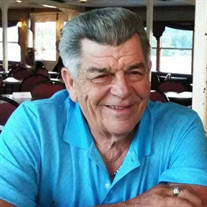 Arthur “Art” Lee Hudson, Jr., 72, of Frankford, passed away Wednesday, June 30, 2021. Funeral services for Art will be Saturday, July 3, 2021 at 11:00 a.m. at Bibb-Veach Funeral Homes and Crematory with Rev. Richard Epperson officiating. Burial will be at the Fairview Cemetery in Frankford. Visitation will be from 9:00 a.m. to 11:00 on Saturday at the funeral home. Art was born May 8, 1949 in Hannibal, Missouri to Arthur Lee Hudson Sr. and Nellie Ethel Fible Hudson. He was united in marriage to Brenda Kay Adams on July 23, 1966. She preceded him in death. Art grew up in New London on the Hudson family dairy farm. After marrying, Art and Brenda moved to Frankford and began farming there. Art worked for the cheese factory in Bowling Green, and Northern Missouri Lumber in Hannibal before he and Brenda started a general contracting business, A & B Contracting. Later, Art began raising cattle and tending hay crops as a hobby. He retired a couple years ago, at age 70. Art’s favorite hobby was attending auctions, where he would buy things to resell. He enjoyed music, especially his son’s band. Art enjoyed fishing and hunting on the farm. He was an excellent woodworker, and was well known for his creations. Art is survived by sons Tra (Carol) Hudson of Bowling Green, and Bob Hudson (Kenny Trujillo) of Pueblo, Colorado; daughter Melissa (Shane) Stone of Casper, Wyoming; grandchildren: Lauren (Anthony) Nosbush, Matt (Alyssa) Hudson, Guy (Sarah) Stone, Emily (Garrett) Williams, and Taylee (Christian) Gopperton; seven great-grandchildren, with two expected this fall; brothers Jerry (Lola) Hudson of Utah and Donald (Delores) Hudson of Florida; sister, Diana (Eddie) Keim of Hannibal, Missouri; and special friend, Pam Bolte; along with many nieces, nephews, and cousins. He was preceded in death by his parents; and wife, Brenda. Pallbearers will be Tra Hudson, Carol Hudson, Bob Hudson, Kenny Trujillo, Melissa Stone, and Shane Stone. Memorials may be made to Salt River Christian Church of New London.

The family of Arthur Lee Hudson Jr. created this Life Tributes page to make it easy to share your memories.

Send flowers to the Hudson family.