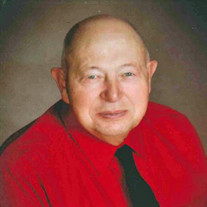 Arthur Guy (Buck) Reid, age 79 of Maywood, MO passed away Monday, March 5, 2018 at his residence. Funeral services will be held at 10:00am on Friday, March 9, 2018 at the Edgewood Baptist Church with Rev. Ardell Polk and Dr. Jeff Brown officiating. Burial will be held in the Edgewood Cemetery. Visitation will be held from 4:00pm until 7:00pm on Thursday, March 8, 2018 at the Bibb-Veach Funeral Home in Bowling Green. Buck was born November 8, 1938 in Cyrene, the son of Robert Guy and Hazel Marguerite Johnson Reid. He married Willa Rae Johnson at the Second Baptist Church in Bowling Green February 22, 1964. She survives. Other survivors include daughter Melissa Luttrull (Rick) of Lewistown, MO; son Dale Reid of Macon, MO; grandchildren Ashton, Sydney and Luke Luttrull, Faith and Cash Reid; brother Dean Reid of Louisiana; nieces, nephews and cousins. He was preceded in death by his parents and brother Morris Reid. Buck lived in Pike County most of his life and spent the last 7 years in Maywood, MO to be close to family. He was a member of the First Baptist Church in Ewing, MO and had trusted Christ as his Savior as a young boy. Buck served in the United States Army during the Vietnam War, spending time in Germany. Buck was a farmer, taking care of grain and livestock. He also spent 29 years with the Missouri Dept. of Transportation at the Eolia shed in maintenance and as a maintenance supervisor, winning several safety awards. Buck enjoyed farming, camping and spending time with his grandchildren. Serving as pallbearers will be Jack Reid, Ben Reid, Bill Akers, Rob Hall, Phillip Reid and Harold Wyble. Serving as honorary pallbearers will be Philip Brown, David Robinson, Roy Cox and Billy Wayne Johnson.

Arthur Guy (Buck) Reid, age 79 of Maywood, MO passed away Monday, March 5, 2018 at his residence. Funeral services will be held at 10:00am on Friday, March 9, 2018 at the Edgewood Baptist Church with Rev. Ardell Polk and Dr. Jeff Brown officiating.... View Obituary & Service Information

The family of Arthur Guy "Buck" Reid created this Life Tributes page to make it easy to share your memories.

Send flowers to the Reid family.