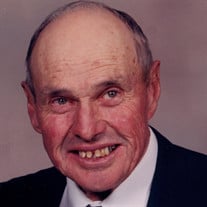 Benedict Vincent Kientzy of Silex, MO passed away Saturday, February 18, 2017, at the age of 90. Dick was born March 21, 1926. Dick was one of seven children born to George Martin Kientzy and Clara Miller Kientzy of rural Millwood. He married... View Obituary & Service Information

The family of Benedict Vincent Kientzy created this Life Tributes page to make it easy to share your memories.

Send flowers to the Kientzy family.