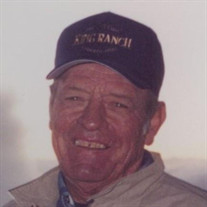 Benny Mac Hall, 79, of Eolia, passed away Tuesday, August 11, 2020, at Missouri Baptist Hospital in St. Louis. Funeral services will be held Saturday, August 15, 2020 at Edgewood Baptist Church at 10:30 a.m. with Pastor Mark Albee officiating. Burial will be at Edgewood Cemetery. Visitation will be from 4:00 to 8:00 p.m. on Friday, August 14, at Bibb-Veach Funeral Home. Funeral services will be live streamed on the Edgewood Baptist Church Facebook page. Benny was born January 22, 1941 in Louisiana, Missouri to Norvell and Doris Aderton Hall. Benny graduated from Clopton High School in 1959. He was united in marriage to Hettie Magee on August 15, 1965 at Edgewood Baptist Church. She survives. Also surviving are sons Rob (Suzanne) Hall and Jason (Lynn) Hall of rural Paynesville; grandchildren Landon, Avery, Logan, Chase, and Larson; sisters Sharon Worthington of Bowling Green and Karen Norton of Clarksville. He was preceded in death by his parents, brother Donald Hall, and sister Bonnie Occhi. Benny lived in rural Paynesville his whole life. He lived on the family farm until 1965. He then moved to a farm on the Pike/Lincoln County line for 52 years, before moving to the outskirts of Paynesville for the last three years. He was a lifelong farmer and was also employed by Magruder Construction of Eolia for twenty-five years. Benny enjoyed travelling with his wife and friends during his retirement. He has been a faithful, active member of Edgewood Baptist Church for many years. He was proud of his service in the United States Army. Benny was a hard worker who cherished his family deeply. He loved spending time with his sons and grandchildren. Although he was said to be a quiet person, he always had a smile on his face. Pallbearers will be Landon Hall, Larson Hall, Avery Hall, Chase Hall, Mark Windmiller, and Jeff Windmiller. Honorary pallbearer will be Logan Hall. Memorials may be made to the Clopton Alumni Association, Edgewood Cemetery, or the Pike County Nurse’s Scholarship Fund.

The family of Benny Mac Hall created this Life Tributes page to make it easy to share your memories.

Send flowers to the Hall family.