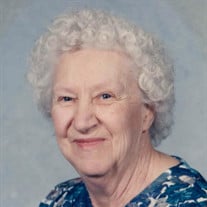 Bernice Ann Grote, 91, of Ashley passed away on Wednesday, August 12, 2015 at Moore-Pike Nursing Home in Bowling Green. Visitation will be held from 4-8pm on Friday, August 14, at Bibb-Veach Funeral Home in Bowling Green. Funeral services will be held at 10 a.m. on Saturday, August 15, at St. Clement Catholic Church, in St. Clement, with Father Lou Dorn officiating. Burial will be held at the St. Clement Cemetery. Bernice was born September 4, 1923 the daughter of A.B. (Andrew Ben) and Anna Orf. On October 22, 1941 she married Albert Joseph Grote at St. Clement Catholic Church. In 1943, a son, Larry Albert, was born to this union. Bernice was born, and spent her childhood in rural Ashley. In adulthood, she chose to make her home and raise her family there. From 1939-1959 she assisted in and later took over management of, the “Orf and Annie” tavern/general store. She and her husband also operated a small tavern in Curryville until its unfortunate destruction by fire. After a second fire destroyed their Ashley business, Bernice worked for a while serving lunch at the Ashley School. Bernice’s life was devoted to her family. After losing both her mother in 1959, and husband in 1963, she cared for her father, who suffered a debilitating stroke, until his death in 1969. With the birth of her first granddaughter, Bernice realized her true calling—caring for the next generation of her family. She was an endless source of help to her son, and his wife, in raising their four daughters, keeping house, and assisting on their small farm. Bernice didn’t know a stranger, and as such, one would be hard pressed to find anyone who didn’t love her. She always had a smile, hug, or kind word for any and all she met. This genuine kindness never diminished, even as her health did. She made many new friends among her dedicated caregivers at Moore-Pike Nursing Home. She had a deep love for her family and also a devout faith in the Good Lord. Bernice was a lifelong member of the St. Clement Catholic Church and dedicated supporter of the Poor Souls Society. She faithfully prayed the rosary with her family every evening for 45 years; a tradition that comforted her loved ones in her final days. She is survived by her son; four granddaughters Felicia Kroencke-Gamm and husband Tim, Tina Niemeyer and husband Roy, Melinda Kneib and husband Jason, and Angela Eckler and husband Ben all of Bowling Green; twelve great-grandchildren, Hannah, Jessica, Breanne and Chloe Kroencke, Loren, Kimberly and Megan Niemeyer, Bryleigh Kneib, Carissa and Delci Eckler, and Noah and Avery Gamm; and many dear cousins, nieces, and nephews. She was preceded in death by her parents; husband; daughter-in-law, Catherine Grote; and grandson-in-law, Jonathan Kroencke. Serving as pallbearers are Roy Niemeyer, Jason Kneib, Ben Eckler, Russell Orf, George Lee Knock, and Michael Swarnes. Honorary pallbearers are Roland “Duke” Orf, Simon Orf, Bill Orf, and Leon Knock. Memorials may be made to masses in her memory, or to the St. Clement Cemetery Association. Bernice will be dearly missed, but her legacy of love will carry on in the family and friends she leaves behind.

The family of Bernice A Grote created this Life Tributes page to make it easy to share your memories.

Bernice Ann Grote, 91, of Ashley passed away on Wednesday, August...

Send flowers to the Grote family.