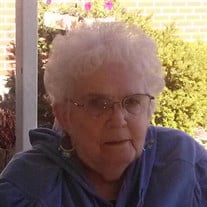 Betty Dowell Eoff, age 86, of Bowling Green, passed away Monday, January 3, 2017 at the Moore-Pike Nursing Home in Bowling Green. A Mass of Christian Burial will be held at 10:00 am Friday, at the St. Clement Catholic Church with Fr. Bill Peckman officiating. Burial will be held in the St. Clement Cemetery. Visitation will be held from 4:00pm until 7:00pm on Thursday at the Bibb-Veach Funeral Home in Bowling Green. Betty was born December 13, 1930 in Silex, MO, the daughter of Walter and Anna Bell Royster Shaw. She married Marvin Dowell October 30, 1948. He preceded her in death in September 1983. Betty later married Walter Eoff in November 1992. He preceded her in death August 2005. Survivors include sons Robert Dowell Sr (Jan) of Metairie, LA and Marvin Floyd Dowell (Linda) of Bowling Green; daughter Penny Gast of Bowling Green; grandchildren Jennifer Frisbey (Shane), Robbie Dowell Jr (Heidi), Sean Dowell (Tammy), Katie Maras (Brandon), Aaron Dowell, Ashley Geissert (Tyson), Austin Dowell (Chelse) and Colton Gast; 17 great grandchildren; brother Bill Shaw (Trudy); sister Wanda Colbert; nieces, nephews and cousins. Betty was preceded in death by her parents, husbands, sister Darlene Green; brother James Shaw and son-in-law Pete Gast. Betty was born and grew up in the Silex area, but lived most of her life in Bowling Green. She was a member of the St. Clement Catholic Church. She enjoyed her work. It was her passion. She enjoyed spending with her neighbors and having coffee together. She hosted big holiday dinners for the family and she would send packages of cookies to all of her family, including her family down south during the holidays. Betty enjoyed spending time with her children and grandchildren. Serving as pallbearers will be Aaron Dowell, Austin Dowell, Robbie Dowell, Sean Dowell and Preston Frisbey. Memorials may be made to the Donors’ Choice.

Betty Dowell Eoff, age 86, of Bowling Green, passed away Monday, January 3, 2017 at the Moore-Pike Nursing Home in Bowling Green. A Mass of Christian Burial will be held at 10:00 am Friday, at the St. Clement Catholic Church with Fr. Bill Peckman... View Obituary & Service Information

The family of Betty Dowell Eoff created this Life Tributes page to make it easy to share your memories.

Send flowers to the Eoff family.