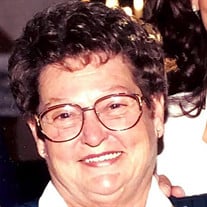 Bonnie Jean Watson, 88, of Bowling Green went home to be reunited with her husband, family members and her Lord on Sunday, July 18th. Private family graveside services will be held Tuesday, July 20th at Bowling Green Cemetery. Bonnie came bouncing into this world May 16, 1933 to Tony and Angie (Perkins) Calvin in Louisiana. On October 14, 1950 she was united in marriage to Roy Watson. He preceded her in death. Four children came from their union, Richard ‘Dick,’ Charles ‘Chuck,’ Patricia ‘Pat’ and Barbara ‘Barb.’ Bonnie grew up and lived most of her life in and around the Pike County area. While she worked numerous jobs throughout her life, she would tell you the best job she ever had was raising her family. She spread her love of fishing and camping on to not only her children, but her grandchildren. Most summers, those same grandchildren could be found running around her house or her running them around to their ball games. Bonnie had a deep love for family and was at her happiest when they were all gathered at her house for a weenie roast down by the creek or one of the many Calvin family meals. Bonnie’s door and kitchen table were open to one and all who needed an ear for listening, which was always followed by heartfelt advice whether you wanted it or not. Survivors include son, Dick Watson and wife, LuAnn and daughter, Barb Allison and husband, Dennis, all of Bowling Green. The grandchildren that loved to tease Granny, but always left the house feeling loved, includes Craig Rosenburg and wife, Liz of Bowling Green; Kristina Brazier and husband, Brandon of Wright City; Kelley Watson of San Diego, Calf.; Marianne Everhart of Bowling Green; Pamela Hoth and husband, Rob of St. Louis; Joey McCollum and husband, Lance of Curryville; Matthew Watson and wife, Amy of Richmond Heights; Kari Burse and husband, Justin of Pleasant Hill, Ill. and Lucas Watson of Chicago, Ill. Bonnie also had numerous great grandchildren and great-great grandchildren. Siblings left to cherish their sister’s memory include Jim Calvin and wife, Phyllis of Louisiana; Shirley Benn of Center; Venita Burleson and husband, Dean of Louisiana; Ruth Shumaker and husband, David of Louisiana. Proceeding her in death were her parents, husband, daughter, Pat; son, Chuck; brothers, Charles Ernest (infant), Richard and Jerry; and sisters, Jane and Martha Sue (infant). In lieu of flowers, the family asks that donations be made to the Heartland Hospice, in care of Bibb-Veach Funeral Home and Crematory.

The family of Bonnie Jean Watson created this Life Tributes page to make it easy to share your memories.