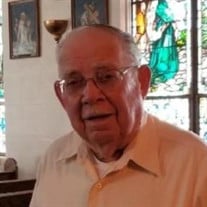 Henry Cecil “Bud” Edelen Jr., 92, of New Hartford, passed away peacefully at his farm surrounded by his family Tuesday, January 12, 2021. A Mass of Christian Burial for Bud will be held 11:00 am on Saturday January 23, 2021 at St. Alphonsus Catholic Church in Millwood, Missouri where he was baptized July 28, 1928. Fr. Charles Tichacek will be officiating. Visitation will be held from 9:00 am until time of services. Burial to follow at St. Alphonsus Catholic Cemetery. A family luncheon will immediately follow at the Millwood Knights of Columbus Hall. Bud was born June 10, 1928 in Corso, Missouri to Henry Cecil Sr. and Jessie Mae Nichols Edelen. Bud had 5 children; Sharon Ann Curran and William Robert Edelen with Rose; and George Roger Edelen, Theresa Jean (Nick) Brigman, and Sheila Lynn Rhoades with Billie Jean. Bud grew up all over Missouri, including Leesburg, St. Louis, and Silex. In 1946 he enlisted in the United States Navy and was honorably discharged in 1948, where he returned to Oregon. He moved to Alaska in 1951 to play music and work as a painting contractor. He also served as a private pilot while in Alaska. He began working for the telephone utility in 1955 until his retirement in April of 1983, at which time he came back to Missouri and established a farm in New Hartford, where he spent the last 35 years. Bud’s passion for music opened up opportunities to play with musicians like Bob Wills, Johnny Gimble, Willie Nelson, Waylon Jennings, and other top musicians over the years. His band, Swinging Strings, performed in Missouri and several surrounding states. Bud enjoyed farming, fishing, and hunting. In Alaska he had an island in the Kenai River where the family spent many happy years fishing. He particularly liked hunting caribou, moose, and bear in Alaska, and deer, turkey, quail, and other birds in Missouri. Bud was a big St. Louis Cardinal fan and never missed a game. Bud is survived by his children: Sharon, George, Theresa, and Sheila; fifteen grandchildren; many great-grandchildren; sisters: Joyce, Susan, and Jeannie; and many nieces, nephews, and cousins. He was preceded in death by his parents; son, William; and siblings: Mary Alice “Toni” DePietro, Virginia Lee “Tiny” Morse, James Tandy Edelen, Robert Joseph “Bobby” Edelen, William Richard “Bing” Edelen, and Dennis Edward Mattingly. Serving as pallbearers will be family members Todd Edelen, Mark Edelen, Billy Joe Edelen, Nick Brigman, Kenny Scherder, and Derrick Wolfe. Serving as honorary pallbearers will be Roger Edelen and Kevin Scherder. In leu of flowers memorials may be made to St. Alphonsus Catholic Church. Online condolences may be made at www.bibbveach.com

The family of Bud Edelen created this Life Tributes page to make it easy to share your memories.

Send flowers to the Edelen family.