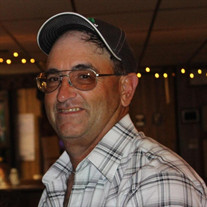 Carl E. Smith, 60, of Curryville, passed away Thursday, June 17, 2021 at his home. Funeral services for Carl will be held on Tuesday, June 22nd, 2021 at 10:00 a.m. at the New Harmony Christian Church in Curryville with Pastor Greg Wyble officiating. Burial will be in the New Harmony Cemetery. Visitation will be Monday, June 21, 2021 from 5:00 p.m. to 8:00 p.m. at Bibb-Veach Funeral Homes and Crematory in Bowling Green. Carl was born April 12, 1961 in Louisiana, Missouri to Byron Lavell and Barbara Lee McClellan Smith. He was united in marriage to Marcia June Rutherford on June 6, 1981 in Middletown, Missouri. She survives. Also surviving are his mother, Barbara Darnell of Curryville; son, Christopher (Megan) Smith of O’Fallon, Missouri; daughter, Sarah (Zach) Elliott of Curryville; grandchildren: Owen and Wyatt Smith, and Quinn and Cooper Elliott; brothers: Mike (Leann) Smith of New Hartford, Steve (Gina) Smith of Le Mars, Iowa, and Ron (Dena) Smith of Columbia, Missouri; and many nieces, nephews, cousins and friends. Carl was preceded in death by his father, Byron Smith. Carl grew up in Curryville and lived on the family farm his entire life. He was a 1979 graduate of Bowling Green High School, where he participated in FFA and Band. After graduation, he immediately went to work farming with his father. Carl was a member of New Harmony Christian Church, where he served as a deacon and a board member. He spent the last 27 years employed at Central Stone Company as the office manager and he also ran the loading. Carl was a dedicated and non-stop worker. His summer vacations were reserved for baling hay. He liked horses, and enjoyed travelling to Ava, Missouri to watch the fox trotters. Carl liked watching sports, and was an avid fan of the St. Louis Cardinals. He also enjoyed watching westerns. His grandchildren were his world; he loved giving them tractor rides on his Allis Chalmers and Massey tractors. He enjoyed camping with his children when they were young. Carl also enjoyed bird and deer hunting, and fishing. Carl was a man of pride, and will be sadly missed by all who knew him. Pallbearers will be Ron Smith, Steve Smith, Mike Smith, Paul Wayne McChristian, Phil Rinner, Lindell Rutherford, and Zach Elliott. Honorary pallbearers will be the grandchildren: Owen Smith, Wyatt Smith, Quinn Elliott, and Cooper Elliott. Memorials may be made to New Harmony Christian Church or St. Jude’s Children’s Hospital.

Carl E. Smith, 60, of Curryville, passed away Thursday, June 17, 2021 at his home. Funeral services for Carl will be held on Tuesday, June 22nd, 2021 at 10:00 a.m. at the New Harmony Christian Church in Curryville with Pastor Greg Wyble officiating.... View Obituary & Service Information

The family of Carl E. Smith created this Life Tributes page to make it easy to share your memories.