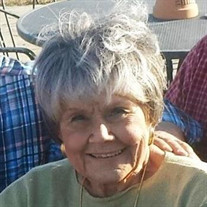 Carol Dean McCormack, age 79, of Eldon, MO, formerly of Silex, passed away Thursday, October 31, 2019, at the Rock Island Village Assisted Living Facility in Eldon, MO. Visitation will be held from 9:00 am until time of services on Tuesday, November 5, 2019, at the Bibb-Veach Funeral Home in Silex, Mo. Services will be held at 11:00 am with Scott McCormack officiating. Burial will be held in the Auburn Cemetery. Carol was born February 19, 1940 in Louisiana, MO, the daughter of Henry and Thelma L. (Coose) Woods. She married Perry B. McCormack, of Festus, MO on June 8, 1963. He preceded her in death October 8, 2011. Survivors include son Scott B. McCormack (Tina) of Sunrise Beach, MO; grandsons Justin Cox (Molly) and Damon Sasyk (Alicia); great grandchildren Millie, Sawyer, Mina, Taylor and Peyton; sister-in-law Beatrice Huskey (Robert); nieces and nephew Laura, Karen, and Timothy. She was preceded in death by her parents, husband; brother Gerald Woods who died in infancy; and sisters Thelma Woods and Linda Hollingsworth. Carol was a teacher for many years. Her first teaching job was in Tupelo, MS, she then returned to Missouri where she taught in South St. Louis and Danville, IL until returning to Silex and serving as a Principle for Silex R-1 schools. She later became Assistant Superintendent in Edwardsville, IL from where she retired. Although retired, she did fill in as a teacher’s aide from time to time, continuing her love for education. Carol was a former member of Silex and Auburn Presbyterian Churches and was most recently a member of New Salem Baptist Church in Dixon, MO. In lieu of flowers, the family request donations be made to Samaritan's Purse, PO Box 3000, Boone, NC 28607 or online at www.samaritanspurse.org

Carol Dean McCormack, age 79, of Eldon, MO, formerly of Silex, passed away Thursday, October 31, 2019, at the Rock Island Village Assisted Living Facility in Eldon, MO. Visitation will be held from 9:00 am until time of services on Tuesday,... View Obituary & Service Information

The family of Carol Dean McCormack created this Life Tributes page to make it easy to share your memories.

Send flowers to the McCormack family.