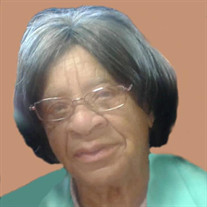 Castella Izla Mae Crumes, 90, of O’Fallon died February 27, 2020 at Pike County Memorial Hospital in Louisiana. Funeral services will be held Sunday, March 1, 2020 at 1:00 p.m. at Bibb-Veach Funeral Home in Bowling Green with Rev. Sammy Lorton officiating. Burial will be in the Eolia Community Cemetery. Visitation will be from 11:00 a.m. – 1:00 p.m. at the funeral home. Castella was born November 1, 1929 to William B. and Velmer Jane Brown Simons in Eolia, Missouri. On December 2, 1966 she married Wilbert Crumes in Eolia. He preceded her in death on October 22, 2002. Castella grew up in Eolia. After she married, the couple moved to Wentzville, Missouri, where they resided from 1966 – 1979. The couple had one daughter, Deborah, who she was so very proud of. In 1979 the couple moved to the farm in Bowling Green. From 2017 – 2019, she resided with her daughter and family. In 2019 she moved back to Bowling Green, where she presently resided. Castella graduated in 1948 from Lincoln High School in Louisiana. Education was very important to her. She was saved at the age of 20, later sanctified, and was a long-time attendee of the Eolia Free Holiness Church. She loved singing gospel songs. She loved good food and was very industrious. One of her favorite quotes was “Do the task great or small, do it well or not at all”. Castella loved to make people’s acquaintance. She was the last of her family generation, leaving no one to recount the old days. She was alert to the end, and never hesitated to speak her mind. She simply adored her grandchildren Blaze and Blair, and was known as Banny to them. She was known for making pies and sharing those with people to show her appreciation. Castella is survived by her daughter, Deborah Crumes Speas and son-in-law Brian of O’Fallon, and 2 grandsons; Blaze and Blair. Also, a brother-in-law, sisters-in-law, nieces, nephews and cousins. Along with her husband, she was preceded in death by siblings: J.F., Marion, Hattie, W.B., Fred, Harry, L.V., Calvin, Iretha, Velmer, Nellie Zenobia (stillborn sister), and Earnest; along with Mary Lue and Wilford, whom her parents raised as part of the family. Pallbearers will be Blaze Speas, Blair Speas, Allen Perry, Darryl Watson, Bill Florence and Vincent Crumes. Honorary pallbearers will be Brian Speas, Wayne Gamm, Vernon Gamm, Larry Gamm and Buzz Mendosa. Memorials may be made to Eolia Holiness Church or the American Heart Association.

The family of Castella Izla Crumes created this Life Tributes page to make it easy to share your memories.

Send flowers to the Crumes family.