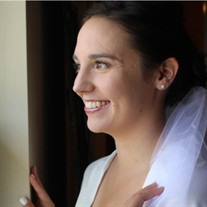 Ceara Renee Perkins, age 24 of Curryville, passed away suddenly February 2, 2019 at Mercy Hopsital in St. Louis. Funeral services will be held at 10:00am Friday at the Bibb-Veach Funeral Home in Bowling Green with Rev. Nathan Detmer officiating. Burial will be in the Curryville Cemetery. Visitation will be held from 4:00pm until 8:00pm on Thursday at the funeral home. Ceara was born June 5, 1994 in Hannibal, MO, the daughter of Jeffrey Lee and Linda Lou Watson Flowers. She married Troy Donald Perkins June 16, 2018 in Frankford. Ceara is survived by her husband Troy of Curryville; parents Jeffrey and Linda Flowers of Curryville; sister Alicia Lee Flowers of Curryville; maternal grandfather Henry Watson of Curryville; paternal grandparents Hermie and Dorothy Flowers of Curryville; grandmother-in-law Barbara Darnell; aunts, uncles, cousins, nieces and nephews. She is preceded in death by her maternal grandmother Kathleen Watson who passed away in 2016. Ceara grew up in Bowling Green and was a 2012 graduate of Bowling Green High School, graduating in the top ten percent of her class and magna cum laude. While in school, Ceara was a member of the FFA and Alpha Beta Gamma. Ceara’s passion was track and cross county. She participated in 4 years of track and cross country from 2008-2012 and earned numerous all conference, all district, all state, and several school records while competing for the Lady Cats. According to Coach and mentor Matt Chance, she was a fierce competitor but also one of the best leaders in the history of the cross-country program. Upon graduating, she attended Culver Stockton College. While there, she ran cross-country for three years and graduated with a Bachelor’s Degree in Nursing in 2016. She furthered her passion for nursing by attending the Blessing-Rieman Nursing Program in Quincy, IL where she earned her RN license. After graduation she worked for Hannibal Regional Hospital doing inpatient rehabilitation before spending the last year and a half working at The Aviary Recovery Center in Eolia, MO where she had just recently been promoted to the night charge nurse. As a nurse, Ceara was known for her compassion, outstanding bedside manners, and great intellect. Nursing and caring for others were her mission. She was a completely selfless individual. Along with running, Ceara loved reading, horse back riding, hunting, cards, bowling and bargain shopping at thrift stores. She loved her animals and being with her friends. When people were down, she had a way of turning them around. Her smile was infectious. Serving as pallbearers will be Jeff Johnson, Kyle Elliott, Bill Hedgpeth, Matt Chance, Cody Watson and Donald Griffith. Serving as honorary pallbearers will be Camdon Elliott, Tucker Watson and Tyler Johnson. Memorials may be made to the donors’ choice.

The family of Ceara Renee Perkins created this Life Tributes page to make it easy to share your memories.

Send flowers to the Perkins family.