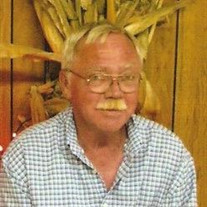 Cevero “Butch” Boyer, age 62 of Bowling Green, passed away Thursday, February 8, 2018 at the Harry S. Truman Veterans Hospital in Columbia, MO. Graveside Services will be held on Tuesday, February 13 at 11:00 a.m. the Greenlawn Cemetery in Bowling Green. Butch was born August 17, 1955 in Louisiana, the son of Claude W. Boyer and Rena Mae Holland Burgmeyer. He married Becky Rollf June 2, 2006. Survivors include wife Becky Boyer of Bowling Green; children Samuel Boyer (Cheryl) of O’Fallon, Margaret Cox of Vandalia, Steven McMillen II and Heather McMillen; grandchildren Josh Cox, Marissa Cox of Vandalia, Caitlyn Smith and Zack Smith of O’Fallon; he was also a special “Poppy” to the two grandchildren he was raising, Hunter McMillen and Allison Hays. He is also survived by his brother Bill Hawkins of Bowling Green; sisters Carolyn Irvine (Bill) of Bay City, TX, Anna Moore (Larry) of Bowling Green, Cindy Potter of Bowling Green, Betty Jean Jacobs (Jake) of Corpus Christi, TX; many nieces and nephews. He was preceded in death by his parents. Butch lived in Pike County for most of his life. He served in the United States Air Force during the Vietnam Era where he specialized in Electronics and Firefighting Vehicle Repair. Butch then worked for the Corp of Engineers, Mark Twain Lake as a fabricator. He received many special awards for his designs of building and boat ramps. Butch was also employed at Fred’s Auto Sales as an auto body repairman until his retirement. He attended Vernon Regional College at Vernon, TX. Butch enjoyed caring for his grandchildren, Reading, cooking and watching NASCAR. Butch will be remembered for his wonderful sense of humor, his deep devotion to his family and his selflessness in taking caring of others. Cremation rites are under the direction of Bibb-Veach Funeral Home in Bowling Green.

The family of Cevero "Butch" Boyer created this Life Tributes page to make it easy to share your memories.

Send flowers to the Boyer family.