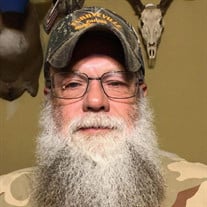 Charles “Chuck” Lloyd Turbyeville, 58, of Silex, passed away Monday, February 28, 2022 at Lincoln County Hospital in Troy, Missouri. Graveside services for Chuck will be held Monday, March 7, 2022 at 11:00 a.m. at the Mt. Zion Cemetery in O’Fallon, Missouri. Visitation will be Sunday, March 6, 2022 from 4:00 to 7:00 p.m. at Bibb-Veach Funeral Home in Silex. Chuck was born March 20, 1963 in Canon City, Colorado to Jack Lloyd and Sharon Kay Trenhaile Turbyeville. He was united in marriage to Connie Lee Higgins. She survives. Also surviving are his mother, Sharon of Gamma, Missouri; son, Charles Turbyeville Jr. of Silex; daughter, Cathlene Turbyeville of Anderson, California; sister, Sherry Turbyeville of Gamma, Missouri; along with uncles, cousins, a nephew, and extended family. He was preceded in death by his father, Jack Turbyeville; brothers, Rick Turbyeville and Jack Allen Turbyeville; and a niece, Ciara Turbyeville. Chuck grew up in O’Fallon, Missouri and attended Fort Zumwalt North School. After graduation Chuck enlisted in the Unites States Navy, where he served from November 1981 to November 1984. He was stationed at St. Mary’s Georgia, and also served on the USS Simon Lake (US 33) as an E-3. Chuck began working when he was 14 years old. He worked several jobs growing up. He was employed as a bonding mechanic with McDonnell Douglas/Boeing, and also at GKN Aerospace, until his retirement in 2016. After retirement, he went to work part-time at the Tire & Lube Express at Wal-Mart in Troy. Chuck served as the Mayor of Silex for 2 years, and he was currently serving as an Alderman. He was a member of the Old Guard. Chuck enjoyed hunting and fishing. The family farm was his favorite place to get away. Chuck’s friends and family were very important to him and he always enjoyed spending time with them. Pallbearers will be Steve Dussold, Danny Dussold, Leonard Hopke, Mike Lee, Stu Gambrill, Charles Trenhaile, Michael Trenhaile, and Andy Meadows. Honorary pallbearers will be Bob Momphard, Jeff Allen, Gary Allen, and Brian Ostmann. Memorials may be made to the family.

The family of Charles (Chuck) Lloyd Turbyeville created this Life Tributes page to make it easy to share your memories.

Send flowers to the Turbyeville family.