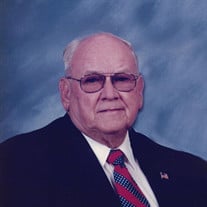 Charles Clemens Forgy, age 95, passed away at Tri County Care Center at 12:30 a.m. Thursday, June 17, 2021. Funeral services will be held Monday, June 21, 2021 at 11 a.m. at the First Baptist Church, Vandalia, Missouri, with Rev. Bob Hoehn and Rev. Brian Lehenbauer officiating. Burial will be in the Vandalia City Cemetery with full military honors being conducted by VFW Post #5553 and Missouri Military Honors Guard. Visitation will be held from 9:30 am – 11:00 a.m. at the First Baptist Church, Vandalia, Missouri. Bibb-Veach Funeral Homes & Crematory in Bowling Green, MO is handling arrangements. Charles was born in Vandalia on November 26, 1925, the son of Otis and Iva Cook Forgy. He grew up in Vandalia and graduated from Vandalia High School, Class of 1943. At the age of 17 on April 3, 1944 he was inducted in the United State Army. His basic training was at Camp Walters, Mineral Wells, Texas, 103rd Infantry. After basic training, he shipped out from New York City with a convoy of 21 ships to serve the next 18 months in Europe during World War II. He received an Honorable Discharge from the Army on June 6, 1946. This service to his country was very important to him during his life. He returned to Vandalia and through the years worked for Kroger, Hall & Jerman Elevator, Harberson-Walker and MFA. He married Shirley Davis of Bowling Green on April 8, 1955. They had no children but were a much-loved aunt and uncle. Charles was happiest when he was behind the wheel of a truck and driving anywhere. He and Shirley enjoyed many trips together. One special trip was back to France with members of his 103rd Division. They visited places where he served in World War II. Many Vandalia residents would remember his daily Suburban drives making sure all was well in Vandalia. Charles was a long-time member of the Vandalia Fire Department, VFW, American Legion Post #510, Vandalia Jaycees, Vandalia Lions Club and Vandalia Country Club. In checking First Baptist Church records, Charles, at his death, was the oldest member of the church and also the member with the longest continuous membership, being baptized on November 18, 1934. He is survived by his nephew, Boyd Barrett, his sister-in-law Charlene McCune, nieces Beth (Todd) Whitaker, Victoria (Jeff) Grove and Meredith McCune. Several great nieces, a nephew and a great great nephew. He was preceded in death by his wife Shirley, his sister Helen Barrett, brother-in- law Berwyn Barrett, brother-in-law Tapley McCune and niece Nancy Linn McCune. Serving as pallbearers will be Boyd Barrett, Jay Orr, Barry Sparks, Bill Harris, Todd Whitaker, and Jeff Grove. Serving as honorary pallbearers will be Leon Dempsey and Patti Ingram. Memorials may be made to the First Baptist Church of Vandalia, Van-Far Alumni Association, or the Central-Missouri Honor Flight.

The family of Charles Clemens Forgy created this Life Tributes page to make it easy to share your memories.

Send flowers to the Forgy family.