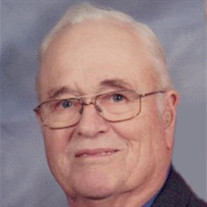 Charles LaVerne Love, 89, of Curryville, passed away January 14, 2020 at Boone Hospital Center, Columbia, Missouri. Funeral services will be held Friday, January 17, 2020 at 10:00 a.m. at Bibb-Veach Funeral Home in Bowling Green with Bro. Lyndel Thompson officiating. Visitation will be Thursday, January 16 at the funeral home from 4:00 p.m. to 7:00 p.m. Burial will be at the Bowling Green cemetery. Charles, the only child of Orion and Stella Lucille Ince Love, was born August 4, 1930 in Louisiana, Missouri. He grew up in Pike County and lived most of his life on a farm outside of Curryville. He graduated from Bowling Green High School in 1948 and attended the University of Missouri-Columbia for one year. He married Gladys Lucille Hiles on June 12, 1954 in Bowling Green, MO. She preceded him in death on March 1, 2017. Charles started farming with his father, and he also farmed ground north of Curryville. In 1961, Charles and Gladys purchased a farm of the late James Hume located on Route U between Curryville and Bowling Green. Over the years, additional acreage was purchased from Mrs. Jessie Sisson, Mrs. Myrtle Sisson and Mrs. Lenora Wright. They ran a grain and hog confinement operation until Charles “retired” in 1999. After fire destroyed their home in 2001, they built a house north of Bowling Green on Highway 61. After retiring from farming, he and Gladys spent some winters in Arizona. Charles had a love for bulldozing and working in his shop. He enjoyed eating out and attending country music events. In October 2018, he moved to an assisted living community in Columbia, MO. He loved spending time with his family and fellow farmers. He was only able to attend one year of college at the University of Missouri, and that is why it was so important for him to make sure his children and grandchildren graduated from college. Charles was a member of the Curryville Baptist Church where he served as Sunday School Superintendent and Sunday School Teacher. He also served as a Deacon for over 50 years. He was a member and past president of Pike County Farm Bureau and served on the Advisory Committee of Production Credit Association. In 1971, Charles and Gladys received the Pike County Farm Management Award. In 1979, they were chosen as the State Fair Farm Family for Pike County. Charles is survived by daughters Sharla (Kevin) Bailey of Bolivar, MO; Marcia (Mike) Greenwell of Shelbina, MO; and Cheryl (Kevin) Schneidler of Curryville, MO and grandchildren Mallory Greenwell (Wes) Beckemeyer of Evanston, IL; Mitchell Greenwell of Columbia, MO; Mason Greenwell of Shelbina, MO; Kyle (Laura) Schneidler of Garden City, MO; and Michelle Schneidler (fiancé Joe Messina) of Kansas City, MO. He is also survived by many nieces and nephews. He was preceded in death by his parents, his wife, and nephew, Mike Betts. Memorials may be made to Missouri Baptist Children’s Home or Pike County Home Health & Hospice.

The family of Charles LaVerne Love created this Life Tributes page to make it easy to share your memories.

Send flowers to the Love family.