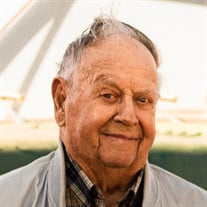 Charles C. Wyble, age 92, passed away December 5, 2019 at his residence. Charlie was born on October 31, 1927 in Cyrene, Missouri to Nettie Lillian (Turpin) Wyble and Cleve Henry Wyble. He married Barbara Ann Gregory at the Oak Grove Church near Eolia, Missouri on April 9, 1951 and she joined him on his military assignment. Charlie is survived by his wife Barbara; children Barbee (Jerry) Wear, Charles Gregory (Kathy) Wyble, and Marilyn Sue Wyble; grandchildren Laura (Pete) Eckstein, Dan (Jessica) Wear, Cole Wyble (Halie Meyer), Audra Wyble (Tom Demos), Brandon Fletcher, and Ian Fletcher; Sister-in-law Millie Gregory; along with numerous nieces and nephews. He was preceded in death by his parents; brothers Cash (Juanita) Wyble, Clark Wyble, John (Lorene) Wyble, Harold (Margaret) Wyble; and sisters Margaret (Everett) Van Ness, Nannie (Harold) Elder, Mildred (Floyd) Haden, Willene (Jesse) Brown, and Bonnie (Charles) Mendonsa; and brother-in-law Tom (Helen) Gregory. He served in the US Army 1950 - 1953 and was in the Signal Corp. He was proud of the high marks he received in his electrical training courses there and went on to use those and his previous carpentry skills when he returned to Bowling Green. During his return from military service he worked as an electrician and carpenter. He wired 69 homes in the area when rural electric came in and he built several homes. During this time he saved to buy his first farm and to achieve his dream of establishing a legacy of farming with his son Greg Wyble, and grandson Cole Wyble. He attended Oak Grove Methodist Church and for years served as Trustee, Usher, collected offering, and participated in the Methodist Men’s retreat. He was responsible for laying out gravesites for the Oak Grove Cemetery. He valued his family and worked tirelessly to set an example of hard-work, honesty, self-reliance, saving, and taking small steps despite setbacks to achieve your goals. His heart and soul are invested in the farming legacy he left for his children and grandchildren. In lieu of flowers, memorials may be made to the Oak Grove Church or the Oak Grove Cemetery fund.

The family of Charles Cleve Wyble created this Life Tributes page to make it easy to share your memories.

Send flowers to the Wyble family.