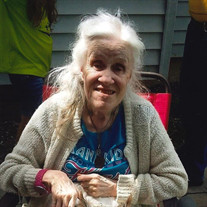 Christine Hollingsworth, 77, of Bowling Green, passed away Thursday, November 11, 2021 at Hannibal Regional Hospital. A Mass of Christian Burial will be held Tuesday, November 16, 2021 at 10:00 a.m. at St. Clement Catholic Church with Fr. Henry Ussher officiating. Burial will be in St. Alphonsus Cemetery in Millwood, Missouri. Visitation for Christine will be Tuesday, November 16th from 9:00 a.m. to 10:00 a.m. at St. Clement Catholic Church. Christine was born December 18, 1943 in Louisville, Missouri to Charles and Annabelle Meuth McDonald. She was united in marriage to John Hollingsworth in 1978. He preceded her in death. Christine grew up in Louisville, Missouri and attended Silex Schools. The family moved to Whiteside, Missouri after her father passed away. Once Christine and John were married, they lived in various locations in the area, eventually settling in Bowling Green. Growing up, Christine was a member of St. Alphonsus Catholic Church. She was currently a member of St. Clement Catholic Church. Christine was active in the Mother to Mothers Club in Hannibal when her children were young. She also participated in Girl Scouts with her daughter. Christine loved to spend her time reading religious books and her Bible. She enjoyed watching game shows, soap operas, and cartoons. Christine was a lover of all animals; but cats were her favorite. Her favorite pastime was spending time with her grandkids. Christine is survived by her children, John Hollingsworth (Valerie) of Curryville, and Anna Emily of Bowling Green; grandchildren: RJ, Ashley, Breanna, Alivia, Kadyn, Timmy, Tristan, Natalee, Annalynn, and Conner; former daughter-in-law, Stephanie Stone, and a niece. She was preceded in death by her parents; husband; brothers, Charles McDonald and Thomas McDonald; and great-grandson, Kaiser. Pallbearers will be Mike Constable, Andy Maxson, Chris Maxson, John Hollingsworth, Robbie Kirk, and Josh Mahoney. Honorary pallbearers will be Christine’s grandchildren. Memorials may be made to the donor’s choice.

The family of Christine Hollingsworth created this Life Tributes page to make it easy to share your memories.

Send flowers to the Hollingsworth family.