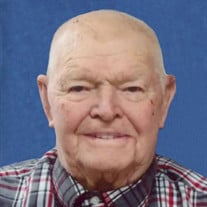 Clarence Joseph Keeven, age 89, of Bowling Green, passed away Monday, December 10, 2018 at the Country View Nursing Facility in Bowling Green. Funeral services will be held at 11:00 a.m. on Friday, December, 14, 2018 at the Bibb-Veach Funeral Home in Bowling Green, MO with Rev. Jason T. Doke, S.T.L. officiating. Burial will be held in the St. Clement Cemetery. Visitation will be held from 9:00 a.m. until 11:00 a.m. on Friday. Clarence was born May 10, 1929 in Florissant, MO, the son of George and Anna Hartmann Keeven. He married Shirley Ann Claus November 26, 1959. She preceded him in death November 20, 2016. Survivors include son Gary Keeven of Bowling Green; daughters Laurie Trower of Sevierville, TN and Lisa Parrish of Hannibal; sister Hilda Schreiner of Bellflower; sister-in-law Joan Lehmkuhl of Florissant; and many nieces and nephews. He was preceded in death by his wife, parents; and brother Louis Keeven. Clarence grew up in Florissant and moved to rural Bowling Green in 1959. He was a member of the St. Clement Catholic Church and served in the US Army during Korean Conflict serving in Germany. Clarence was a K of C member, enjoyed hauling tractors, hog houses, hay, going to auctions and liked to visit with people. He was always open to a good conversation. Pallbearers will be Alan Schriener, Carl Schriener, Mike Schumacher, Gary Purk, Harry Grote and John Koester Jr. Memorials may be made to St. Clement Cemetery.

The family of Clarence Joseph Keeven created this Life Tributes page to make it easy to share your memories.

Send flowers to the Keeven family.