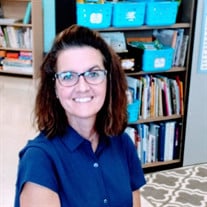 Cynthia “Cyndi” Marie Cerven, 56, of Bowling Green, passed away Wednesday, August 19, 2020 at St. Luke’s Hospital. Memorial Services for Cyndi will be held Saturday, September 12, 2020 at 10:00 a.m. at Bibb-Veach Funeral Home in Bowling Green with Pastor Mike Dallas and Lay Pastor Chris Gamm officiating. Visitation will be held Friday, September 11, from 4:00 – 8:00 p.m. at the funeral home. Cyndi was born November 19, 1963 to Kenneth Muskopf and Candide Cooper. She was united in marriage to David Glenn Crane Cerven on July 30, 1988 in the chapel at the First United Methodist Church in Columbia, Missouri. He survives. Cyndi grew up in Maryland Heights. She graduated from Pattonville High School in 1981, where she was a member of the drill team. She attended the University of Missouri, where she began studying nursing, then transferred to education. She graduated with a Bachelor’s Degree in Elementary Education. She later earned her Master’s Degree in Literacy from Mizzou. She began her career as a teaching assistant at Clopton and taught Special Education one year and Kindergarten one year before moving to Bowling Green School. Here, she began as a teacher’s aide for Karen Rosburg Allen. She went on to teach First Grade for several years, and then became a Title I Reading teacher. She retired in 2019. She was a member of P.E.O., where she enjoyed spending time with her fellow P.E.O. sisters. Cyndi enjoyed being active and liked adventures. She enjoyed hiking, biking, and weight lifting. She loved family vacations to Colorado and Florida, and cruises to the Bahamas. Family was extremely important to Cyndi. She never missed her son’s games, and was a proud member of Momma Cats, coaching other mothers on the rules of the game; she always seemed to be three steps ahead of the sports announcers. Her Wednesday night date nights with Dave to Dos Primos were always important to her. She was a great organizer of the family vacations and life in general, as well as creating social gatherings for friends. She had a huge heart for everyone. Cyndi could be described as friendly, a competent organizer, fun-loving, and fiercely loyal. Cyndi was a member of the Bowling Green Presbyterian Church for 25 years, where she sang soprano in the choir and served as an Elder. She was currently a member of The Refuge Church in Bowling Green. While in college, Cyndi developed Hodgkin’s disease. She received radiation treatments to battle the disease, which later led to thyroid and breast cancer, anemia, and an aortic valve replacement. Through all of this, she kept her spirits high. Some of her favorite sayings were “That happens sometimes”, and “You get what you get and don’t throw a fit”. Cyndi is survived by her father, Kenneth Muskopf and step-mother, Nancy Muskopf of Wildwood, Missouri; her mother, Candide Cooper of St. Charles; husband, David; son Evan Cerven (Kelsey Scherder) of Hannibal; step-sisters, Robin Monks and Amy Yore; and five nephews. She was preceded in death by her grandparents, Vera Muskopf and Norman and Olivia Cooper. Memorials may be made to the Cyndi Cerven Memorial Fund to Support Our Schools.

The family of Cynthia "Cyndi" Marie Cerven created this Life Tributes page to make it easy to share your memories.

Send flowers to the Cerven family.