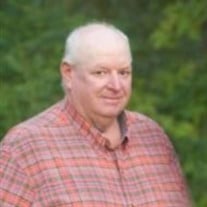 Dean Thomas Wilhoit, 58, of Curryville, passed away Monday, August 24, 2020 at his home. Visitation for Dean will be Thursday, August 27, 2020 from 5:00 p.m. to 8:00 p.m. at Bibb-Veach Funeral Home in Bowling Green. Funeral Services will be held Friday, August 28, 2020 at 10:00 a.m. at Bibb-Veach Funeral Home with Brother Mike Dallas officiating. Burial will follow immediately at Siloam Cemetery. Dean was born October 30, 1961 in Louisiana, Missouri to Wilfred and Susie Lewis Wilhoit. He was united in marriage to Sandy Forrester on June 9, 1990 at Curryville Presbyterian Church, marking their 30th anniversary this year. She survives. Also surviving are children: Brandy (Shawn) Nelson of Bowling Green, David (Emily) Wilhoit of New Hartford, and Stephanie (William) Oberman of rural Curryville; grandchildren: Emma Niemeyer, Leila Niemeyer, Cash Nelson, Kale Wilhoit, Kolten Wilhoit, Jaxson Oberman, and Jayson Oberman; sisters Bonnie Schlote and Debbie Wilhoit, both of Troy; and many nieces, nephews, and cousins. Dean was preceded in death by his parents; brother-in-law, Junior Schlote; and close cousin and farming partner, Billy Lovelace. Dean grew up in New Hartford and lived his entire life there and in Curryville. He was a farmer, and the best chemical sprayer around. He was employed at the Co-op in Troy for five years, then moving to the Central Elevator. He spent the past 17 years working at Service & Supply Co-op in Bowling Green. He loved to hunt; you could often find him at Keith and Bruce Scherder’s property dove hunting. On opening day of deer season, he would be at the family homestead in New Hartford. He was a dedicated, gentle man, and a man of few words; but he was never afraid to drop everything to help others in need. His happiest times were those spending time with his family, especially his grandkids, and piddling around the farm. Pallbearers will be Randy Hummel, Jake Hummel, Tyler Splain, Jeff Grady, Justin Sambo, Ryan Chrisman, Dwane Turner, and Dave Stevens. Honorary pallbearers will be his grandchildren.

The family of Dean Thomas Wilhoit created this Life Tributes page to make it easy to share your memories.

Send flowers to the Wilhoit family.