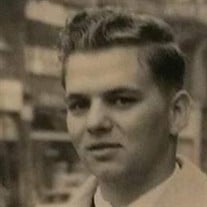 Donald Eugene Stevens, 81, of Bowling Green, MO passed 9/13/19. Don, aka Don the Legend, Daredevil Don Terror of the Turnpike, Don the Bugman Stevens, and often known as Mr. Nice Guy (like Perry Komo), was born to Raymond and Hazel (Cheney) Stevens, in Champagne County Urbana, OH. He married Peggy Jefferson in 1959 and together they had Donald Ray and Tamela Lee. In 1962, he married Barbara Jean Burgess and together they had Barbie Maxine and Elizabeth Love. In 1981, he married Barbara Ruth Spegal and together they had Jackie Ramone. He leaves as his legacy 5 children: Donald Ray Stevens, Tamela Stevens, Barbie Sachs (Steve), Elizabeth Gibson (Marc), Jackie Stevens (Heather); 12 grandchildren Sarah Holck, Danny Thebeau, Sean Thebeau, Rachel Thebeau, Max Sachs, Luke Sachs, Kayla Koester, Marc Gibson, Josh Gibson, Zach Gibson, Korynn Stevens, Cadence Stevens and 10 great grandchildren Isabelle, Jonathan, Robbie, Austin, Reece, Baily, Christian, Carson, Lydia, Lukis. He also leaves to cherish his memory 4 siblings Kennard Stevens (Betsy), Delores Smith (Jim), Bobby Stevens (Wanda), Jackie Stevens (special friend Joyce). He was preceded in death by his mother and father and his nephew Raymond Stevens. Don had several jobs in his youth including sales and photography. He also served in the U.S. Army as a photographer. In later years he was an exterminator for Charlies Pest Control then on to successfully start and run Don’s Pest Control until he retired in 2014. He was passionate about affecting the most positive change in people. He never met a stranger and loved to make people smile. He was always quick with a joke or magic trick. He loved golfing and bowling. A Celebration of Life Memorial Service is scheduled for October 6, 2019 from 1PM-3PM at Bibb-Veach Funeral Home 606 West Main Street, Bowling Green, MO 63334. There will be a gathering with food, drink and storytelling immediately following at the home of Jackie and Heather Stevens 14029 Hwy 61, Bowling Green, MO 63334. You may want to bring a lawn chair. MISS ME- BUT LET ME GO When I come to the end of the road And the sun has set for me I want no rites in gloom-filled room. Why cry for a soul set free? Miss me a little-but not too long And not with your head bowed low. Remember the love that we once shared Miss me-but let me go. For this is a journey that we all must take And each must go alone. It’s all a part of the Master’s Plan A step on the road to home. When you are lonely and sick of heart Go the friends we know And bury your sorrows in doing good deeds. Miss Me – But Let Me Go! -Author Unknown

The family of Donald Eugene Stevens created this Life Tributes page to make it easy to share your memories.

Send flowers to the Stevens family.