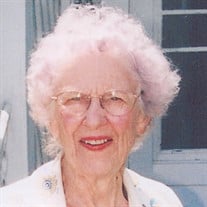 Doris Tinsley Riedel, age 98 of Bowling Green passed away August 2, 2017 at the Moore Pike Nursing Home in Bowling Green. Funeral services will be held 11:00 a.m., Tuesday, August 8, 2017 at the Cyrene Baptist Church with Rev. Bob Hoehn officiating. Burial will be in the Riverside Cemetery in Hannibal. Visitation will be held 10:00 a.m. until time of service at the church. Doris was born August 1, 1919 the daughter of Herbert Spotswood and Nancy Olivia Bibb Tinsley. On May 15, 1949 at the family farm in Cyrene she married Bev H. Riedel. He passed away August 19, 1956. Survivors include nieces Elaine Griffith of Owensville, MO Gail Rutter of Cyrene, Jean(Mark) Ledford of Cyrene; nephew William H (Herbie) (Dolly) Tinsley of Fort Walton Beach, FL; sister-in-law’s Mary Lee Tinsley of Bowling Green, and Dorothy Tinsley of Bowling Green; eight great nieces and nephews and twelve great great nieces and nephews. She was preceded in death by her parents, husband, sister Eleanor Moore, brothers James H. and Herbert S. (Spot) Tinsley; sister-in-law Madeline Tinsley; brother-in-law’s Al Moore and G.H. Riedel; niece Kathy Tinsley; nephew-in-law’s Ron Rutter and Terry Griffith. Doris lived in Hannibal for 60 years until 2008 when she moved in with her niece Jean (Tinsley) Ledford and family. She accepted Jesus as her Savior at the age of 9, and was baptized in the creek by Antioch Church at Cyrene and was a member of the Fifth St. Baptist Church. Doris was a 50 year member of the JR Business & Professional Women’s Club (Mary Hinton Morris Club), a member of the Bowling Green Alumni Association, a 26 year member of the Mark Twain Association of Realtors, past Director of Hannibal Central Business Development, a member of Friends of Historic Hannibal, and the 1st person selected as Sophomore Pilgrimage through the General Federation of Womens Clubs of MO. She was also a Gray Lady for many years for the American Red Cross. Doris worked at the Emporium Ready to Wear in Hannibal in sales and as a bookkeeper, E. Burnham’s Beauty School in Chicago, IL, The Winning Shop in Hannibal in sales, Marie Barker Cosmetics based out of St. Louis, traveling five different states by train and bus, developed the Bibb-Tinsley Concrete Block Co. in Bowling Green with her Uncle Ray Bibb, Beneficial Finance Co in Hannibal as the secretary, Keeling Dress Shop in Hannibal as a bookkeeper, Dr. Henry Sweets Pathology Lab in Hannibal as a lab assistant, Bleigh Construction Company in Hannibal as the payroll clerk, and at the Holme and Hickman and the Goodhart Realty Companies as a Real Estate Agent. Doris contributed her longevity to her p’s & v’s (prayers & vitamins). She was a dedicated Christian; sharing God’s love to people she knew and did not know. She had a beautiful smile, a kind heart, and believed that America is the greatest country blessed by God. She will be greatly missed by her family, friends, and those who ever had a conversation with her. Pallbearers will be Mark Ledford, Benjamin Ledford, Scott Griffith, and Aaron Ervin. Memorials may be made to the Kathy Tinsley Educational Scholarship Fund, Riverside Cemetery, Fifth St. Baptist Church, Pike County Hospice or the Bowling Green Alumni Association.

The family of Doris Tinsley Riedel created this Life Tributes page to make it easy to share your memories.

Send flowers to the Riedel family.