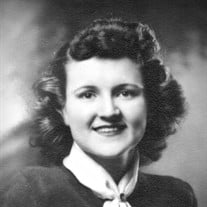 Dorma Catherine (Eddy) Roberts, 87, of Littleton, Colorado, passed away at 12:20 a.m. on February 9, 2019, in Littleton with her family gathered around her. A memorial will be held at 2:00 p.m., on Sunday, May 26, at the Bibb-Veach Funeral Home in Silex. Burial will be in the St. Alphonsus Cemetery. Visitation is scheduled from 2:00 – 3:00, immediately followed by a celebration with family and friends from 3:00 – 4:00. Following a brief burial ceremony at St. Alphonsus Cemetery, a dinner will be served, beginning at 5:00, at St Alphonsus School in Millwood for all to enjoy and share memories with family and friends. Dorma was born in Troy, Missouri to Gilbert Raymond Eddy and Sarah Alice (Elliott) Eddy on February 15, 1931. She attended school in Silex and Troy, graduating from Buchanan High School in 1947. She married John Frederick Roberts on September 4, 1948, in Millwood, Missouri. She started work for Martin Abstract Company (later U.S. Title) in Troy in 1958, worked there until her retirement in 2002, and was a well known part of the Lincoln County Courthouse community. Dorma was a member of the Silex School Board from 1979 to 1984, and served as president for three years. She was elected Lincoln County Public Administrator in 1971, and served until 1988. Dorma spent most of her life in Millwood, relocating to St. Charles in 2006 and then to Colorado with much of her family in 2015. She enjoyed family and travel, and spent many happy hours with children, grand children and great grand children. Dorma is preceded in death by her husband, John, her parents and her sisters Virginia and Muriel, and leaves behind her 5 children, John Roberts (Jacki), Cathy Trescott (Lew), Jan Rutty (Patrick), Gene Roberts (Natalie), Jerry Roberts (Katie); 10 grandchildren, Jack, Joel, Sara, Kelly, Kristen, Stirling, Kestin, Philip, Natalie and Jade; 8 great grandchildren, Frankie, Mickey, Nina, Fern, Rose, Isabelle, Tiernan and Amelia; and 2 great-great grandchildren, Caden and Lilly.

The family of Dorma Catherine Roberts created this Life Tributes page to make it easy to share your memories.