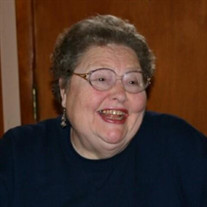 Dorothy was born on Friday, June 23, 1933 at St. Elizabeth Hospital in Hannibal, Missouri to Sidney W. and Mary Delores Fitzpatrick Johnson. She passed away July 4, 2020 at her home in Bowling Green. Funeral services for Dorothy will be held Friday, July 10 at 1:00 p.m. at Bibb-Veach Funeral Home in Bowling Green. Visitation will be from 11:00 a.m. – 1:00 p.m. at the funeral home. Dorothy was raised on a farm outside Bowling Green, with her parents and 3 brothers, who all preceded her in death. She was also a member of Providence Concord Presbyterian Church, just east of Bowling Green, her entire life. She graduated from Bowling Green R-1 High School in 1951. She was united in marriage to Norman Kay Atkinson on July 17, 1951. He preceded her in death on November 29, 2003. Dorothy did not live her entire life in Bowling Green. She lived in Indianapolis, Indiana while Norman was stationed there during the Korean War. Their first son, Bruce E. Atkinson was born at Camp Atterbury Military Hospital in Indianapolis. He preceded them in death on July 10, 1989. After Norman was discharged from the Army, they lived in Kirksville, Missouri where Norman attended Northeast Missouri State Teacher College (now Truman University) under the G.I. bill. While in Kirksville, their daughter, Christy L. Atkinson Wendel was born. After graduation, they moved to Philadelphia, Missouri, where Norman taught high school Industrial Arts and History., and later became Superintendent. Dorothy was a stay-at-home mother. Their son, Ralph T. Atkinson was born in Hannibal, Missouri on February 22, 1962. In 1963 the Atkinson family moved back to Bowling Green permanently. Dorothy later worked as a secretary at Worthington Massey-Ferguson Farm Equipment in Bowling Green. She then became a bank teller, and later the secretary at the Farmer’s/Farmer’s Mercantile Bank (now U.S. Bank) in Bowling Green until she retired in 1998. Dorothy enjoyed quilting, reading, and spending time with her kids and grandkids. She was active in the Order of the Eastern Star where she served as Worthy Grand Matron and also as District Deputy Grand Matron. She is survived by her two children, Christy Wendel and her husband, David, of Bowling Green, Ralph Atkinson and his wife, Kerry, of O’Fallon, Missouri, and daughter-in-law, Marjetta Hurd Atkinson (Mrs. Bruce Atkinson) of Bowling Green; granddaughter Crissy and her husband, Robbie Tamm of Eldon, Missouri; grandson Jared Atkinson and his wife, Bobbi of Bowling Green; eight great-grandchildren: Logan (Macey) Shinn, Levi Shinn, Haley Shinn, Jake (Jessica) Tamm, Owen Tamm, Collin Tamm, Cody Tamm, and Aiden Tamm; and two great-great grandchildren, Emma and Luke. Memorials may be made to The Hope Center in Bowling Green.

Dorothy was born on Friday, June 23, 1933 at St. Elizabeth Hospital in Hannibal, Missouri to Sidney W. and Mary Delores Fitzpatrick Johnson. She passed away July 4, 2020 at her home in Bowling Green. Funeral services for Dorothy will be held... View Obituary & Service Information

The family of Dorothy Lucile Atkinson created this Life Tributes page to make it easy to share your memories.

Send flowers to the Atkinson family.