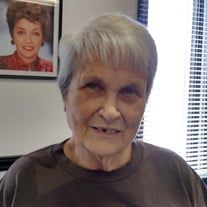 Dorothy Mae Hickson, age 76, of Bowling Green passed away March 25, 2017 at the Moore Pike Nursing Home in Bowling Green. Funeral services will be held 1:00 p.m., Saturday, April 1, 2017 at the Bibb-Veach Funeral Home in Bowling Green. Burial will be in the Spencerburg Cemetery. Visitation will be held 5:00 – 7:00 p.m. Friday, March 31, 2017 at the funeral home. Dorothy was born May 6, 1940 in Ashburn the daughter of Clifford Pick and Eleanora Louise Price Ragan. On January 3, 1959 she married James Herman Leo Hickson. He preceded her in death on October 6, 2015. Survivors include son Arlie Hickson of Bowling Green; daughter Tammie Elliott and husband Joe of Louisiana; three grandchildren Andy, Melissa, and Sabrina Elliott; and many nieces and nephews. She was preceded in death by her husband; parents; siblings John Ragan, Clayton Ragan, James Ragan, Edward Ragan, Nellie Steller, Ruth Meyer, Betty Perettie and Patricia Ragan. Dorothy lived in Pike County all of her life, attended school at the Gentle School just outside of Spencerburg and was a member of the Baptist church. She enjoyed crocheting, sewing and spending time with her grandchildren. Serving as pallbearers will be Andy Elliott, Jonathan Otto, Pattrick Morris, DeLias Grimmett, Cade Waddell, and Byron Guertzgen III. Honorary pallbearers will be Bobby and Jack McCurdy, Thomas Liffict, and Mitchell Campbell. Memorials may be made to the Pike County Home Health and Hospice or the American Heart Association.

The family of Dorothy Mae Hickson created this Life Tributes page to make it easy to share your memories.

Send flowers to the Hickson family.