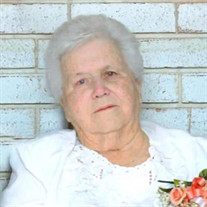 Dorothy Kuntz, 89, went to be with the Lord, on January 26, 2022 at Elsberry Health Care Center due to complications from Covid 19. Graveside services were held at Oak Grove Cemetery near Eolia, on January 27, 2022. Bibb-Veach Funeral Homes in Bowling Green handled the arrangements. Dorothy Ann was born on December 17, 1932 to Henry and Anna Bufford. Their only child, she grew up working on the home place. She met a fellow named Alfred Kuntz in the fall of 1946 at a pie social at Oak Grove School. Alfred purchased her pie and soon they were dating. They were married on October 18, 1950, the fourth anniversary of their first date. Alfred passed away on January 11, 2013. Dorothy attended Pea Ridge School for four years and graduated from Silex High School in May of 1950. She started working at Pike County Hospital as a nurses-aid, but soon followed Alfred when he was drafted into the army. After returning to Eolia, she started preparing tax returns in Bowling Green for Neal and Vera Parsons, and later for Wescott’s Tax Service, until she left to take loving care of her mother for over four years. She retired from private practice in 1990. Dorothy was a housewife, a farm hand, a chicken raiser, a gardener, a canner, and a spur-of-the-moment veterinarian. She could drive tractors, deliver grain, run for parts, build and mend fences, raise hogs, pitch hay, milk the cows, and still be a loving mother to her three children. – Eddie, JB and Karen. Dorothy helped them with their school work, served as 4-H leader and was room mother for many years. Dorothy was initiated into Silex Chapter #80 Order of the Eastern Star and served as secretary for many years. She was currently a 70-year member of Troy Chapter #405. She was an active member of the community, serving as the Secretary of Oak Grove Cemetery Association for over 40 years. In later years, Alfred and Dorothy traveled to Florida and Texas where Dot fulfilled a dream of putting her feet in the ocean and picking up sea shells Dorothy took great pleasure in reading cook books and sharing / trying out new recipes. Dot loved to fish and her hush puppies were delicious. Many a day she took her mother fishing. Lately, Dorothy spent her time trying to teach Karen to cook, getting the markets for JB and Ed, and playing radio Bingo and Solitaire. She also enjoyed watching TV and talking on the phone. Dorothy is survived by her three children, Eddie (Marian), JB and Karen Kuntz, all of Eolia, her three grandchildren – Aaron (Christy) Kuntz of Eolia, Jamie (Grant) Gollaher of Frankford, and Robby Kuntz of Kirksville, and five great-grandchildren, Scott, Kaitlyn, Tyler, and Rileigh Kuntz and Carly Ann Golllaher. Memorials may be made to Oak Grove Cemetery in care of Bibb-Veach Funeral Homes

Dorothy Kuntz, 89, went to be with the Lord, on January 26, 2022 at Elsberry Health Care Center due to complications from Covid 19. Graveside services were held at Oak Grove Cemetery near Eolia, on January 27, 2022. Bibb-Veach Funeral Homes... View Obituary & Service Information

The family of Dorothy Kuntz created this Life Tributes page to make it easy to share your memories.

Send flowers to the Kuntz family.