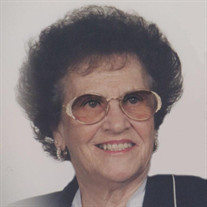 Dorothy “Eileen” Ryan, 97, of Silex, passed away Wednesday, July 15, 2020 at Parkside Manor in Bowling Green. Due to Covid-19, a private Graveside Service will be held at St. Alphonsus Catholic Cemetery in Millwood, Missouri. Bibb-Veach Funeral Home is handling the arrangements. Eileen was born on April 7, 1923 to George Otto and Ruby Belle Estes Knock in Louisville, Missouri. She was joined in marriage to Harry Thomas Ryan on March 27, 1944 in Arkansas. He preceded her in death on September 2, 2006. Eileen grew up in Louisville and attended elementary school in Louisville, and graduated from Bowling Green High School. She was a homemaker most of her life and dedicated herself to raising her family. She was a member of the Culture Club and the U & I Club. She enjoyed flower gardening, bird watching, and spending time with her kids and grandkids. Eileen is survived by son, Kim Ryan (Judy) of Silex; daughters Cheryl Johnson of Troy, Linda Ryan of Troy, and Marcia Glover (Bob) of Troy; grandchildren Tracy Luck (Pam), Tammy Luck, Lanesa Davis (Terry), Shellie Ramsour (Jessi), Scott Klein (Jennifer), Stephanie Freebourn (Mike), Chris Ryan (Sherry), and Robby Ryan (Amy); along with 18 great-grandchildren and 11 great-great-grandchildren; sisters Imogene Colbert (Jr.) of Jacksonville, Illinois and Joanne Edmiston (Larry) of Louisville; and sister-in-law Geneiva Knock of Louisville. She was preceded in death by her parents; her husband, Harry; siblings Verona Brewer and Leon Knock; great-grandson Dyllan Wansing; and granddaughter Tanya Luck. Memorials may be made to the American Cancer Society.

The family of Dorothy "Eileen" Ryan created this Life Tributes page to make it easy to share your memories.

Send flowers to the Ryan family.