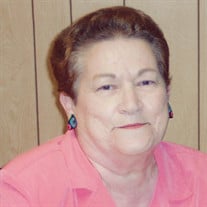 Dorothy Brown Tinsley, age 85, of Bowling Green, passed away Friday, September 22, 2017 at the Country View Nursing Facility in Bowling Green. Funeral services will be held at 10:00 am on Thursday, September 27, 2017 at the Edgewood Baptist Church with Rev. Keth Barnhart and Rev. John Burkhead officiating. Burial will be in the Edgewood Cemetery. Visitation will be held from 4:00pm until 7:00pm on Wednesday at the Bibb-Veach Funeral Home in Bowling Green. Dorothy was born March 1, 1932 in Peoria, IL, the daughter of George Alton and Marjorie Ellen Culley Huckstep. She married Roy Major Brown in May of 1952. He preceded her in death January 31, 1979. She later married James H. Tinsley in October of 1982. He preceded her in death November 9, 2000. Survivors include son Timothy Major Brown(Catherine) of Frankford; daughter Kathleen Helen Cottrell of Bowling Green; grandchildren Miranda Lenea Brown of Bowling Green, James Roy Major Brown (Lacey) of Pleasant Hill, MO, Jacob Andrew Brown (Rachelle) of Pacific; Rebecca Joann Brown (James Simpson) of Warrenton, Abigail Mae Brown of Kansas City, Pvt. Josiah Aaron Brown of Ft. Leonard Wood, Krystal Alisha Sevier (Steve) of Bowling Green and Korey Alton Cottrell of Bowling Green; 9 great grandchildren; step-son Herbie (Dolly) Tinsley of Ft. Walton Beach, FL; many nieces and nephews. She was preceded in death by her parents, husbands and one brother Richard Alton Huckstep. Dorothy was 5 when her family moved from Peoria, IL to Cyrene, where she attended Eagle Point School. Dorothy graduated in 1950 from Bowling Green High School. She was a member of the Edgewood Baptist Church where she sang in the choir and was on the cemetery board. Dorothy sold Avon from 1973 until 2011 and won several Albee awards and was in the Presidents Club. She enjoyed gardening, sewing, cooking and listening to music. She loved spending time with her grandchildren and great grandchildren. Memorials may be made to the Edgewood Cemetery or the BGHS Alumni Association.

The family of Dorothy Tinsley created this Life Tributes page to make it easy to share your memories.

Send flowers to the Tinsley family.