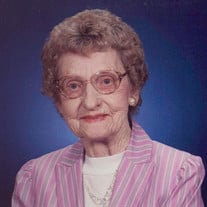 Earlean Hopke, age 100, of Bowling Green passed away peacefully on December 23, 2018 at the Tri-County Care Center in Vandalia. A Memorial Mass will be held 11:00 a.m., Thursday December 27, 2018 at the St Clement Catholic Church with Rev. Jason... View Obituary & Service Information

The family of Earlean T Hopke created this Life Tributes page to make it easy to share your memories.

Send flowers to the Hopke family.