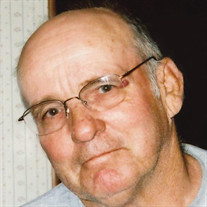 Edward Lynn Clary, 86, of Silex passed away Monday, May 24, 2021 at his home. Cremation rites are under the direction of Bibb-Veach Funeral Home and Crematory of Bowling Green. Services will be held at a later date. Edward was born August 18, 1934 in Menfro, Missouri to Edward Lee and Hilda Marie Stueve Clary-Kluender. He was united in marriage to Eleanor Marie Lauck on November 27, 1964. She survives. Edward moved to Brazeau, Missouri as a child, where he lived with his grandparents. He also lived in Kansas City and St. Louis before moving to Silex. Edward worked for Lionel Moise, Inc. in St. Louis until he started roofing with Biebel Brothers Roofing of St. Louis. At this point, he also joined the Local Union 513 and Local 2, where he was a member until he retired the profession. He then began his second career with the Lincoln County Road Crew until he retired permanently. Throughout his life he also farmed. In his free- time he was a member of the Antique Pulling Club; he had a passion for antique tractor restoration, with his favorites being propane tractors and the brand Minneapolis Moline and Massey Harris. He also collected and restored lawnmowers. Ed also loved his constant companion, Tippy, and his cat, Tommy. Ed and his wife, Eleanor loved eating at Dos Primos in Bowling Green several times a week, where he enjoyed his favorite meals and considered the staff part of his family. Edward is survived by his wife; son, Edward Lynn Clary, Jr. (Liz) of Independence, Missouri; daughters Elaine Boni (Michael) of Washington, Missouri and Ellen Meyer (Scott) of Bowling Green; grandchildren: Brandon Clary and Logan Boni of Washington, Missouri, Emily and Evan Meyer of Bowling Green, Heather Crawford-Perry of Lee’s Summit, Missouri, Edward Lynn Clary III of North Kansas City, Missouri, and Justin Clary of Independence, Missouri; great-grandchildren: Luke, Isaiah, Jeremiah, Stevie, Owen, Margo, Nora, Bella, and Sophie; Danny and Theresa Simpher of Benton, Missouri; Darline Fisher of Williamsburg, Missouri; and many nieces and nephews. He was preceded in death by his parents; daughter, Emily Clary; and brother, Elwood Clary.

Edward Lynn Clary, 86, of Silex passed away Monday, May 24, 2021 at his home. Cremation rites are under the direction of Bibb-Veach Funeral Home and Crematory of Bowling Green. Services will be held at a later date. Edward was born August... View Obituary & Service Information

The family of Edward Lynn Clary created this Life Tributes page to make it easy to share your memories.

Send flowers to the Clary family.