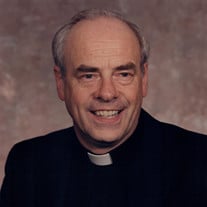 Fr. Edward Anthony Doyle, age 82 of Montgomery City, MO passed away Sunday, March 3, 2019 at the New Florence Care Center in New Florence, MO. A Mass of Christian Burial will be held 11:00 am Friday, March 8, 2019 at the St. Clement Catholic Church with Fr. Dan Merz officiating. Burial will be held in the St. Clement Catholic Cemetery. Visitation will be held from 4:00 pm until 8:00pm on Thursday at the St. Clement Catholic Church. Services are under the direction of Bibb-Veach Funeral Home in Bowling Green. Fr. Doyle was born May 23, 1936 in Dublin, Ireland, the son of Edward Michael and Grace Violet Arnold Doyle. He attended St. Conleth College in Dublin and worked at Browne & Nolan Printing Company in Clonskeagh, Dublin as a managerial trainee. From 1952 to 1957 he participated in Ireland’s National Guard. Fr. Doyle entered the seminary in 1957 in the Dominican and in 1961 transferred to St. Patrick’s Seminary in Carlow, Ireland. He graduated and was ordained a Priest June 6, 1964 in Carlow. Fr. Doyle arrived in the United States July 31, 1964 to assume duties with the Diocese of Jefferson City. During his tenure with the Diocese he served St. Joseph in Jefferson City 1964-1965; went to Peru 1965-1969; St. Benaventure in Marceline 1969-1978; St. Clement in Bowling Green 1978-1987 and Immaculate Conception, Montgomery City 1987-1991. Fr. Doyle served outside the Diocese from 1993-1994 in the Cayman Islands and from 1994 until presently served Spanish Ministry in Nursing Homes, hospitals and prison ministry, as well as a weekend fill in when needed. Fr. Doyle joined Rotary International in 1969 while in Marceline and continued in Bowling Green and became a chapter member of the club in Montgomery City. He was a Rotarian for 43 years. He was a member of the AOH Ancient Order of Hibernians from 1998-2018 and was chaplain. Fr. Doyle was very involved in the cursillo movement. He belonged to the Columbia TCA (Train Collectors Association) and a chapter member of the Warrenton Central MO Railroad Assocation. He worked with the Humane Society of Montgomery City from 1998 until present. Fr. Doyle is survived by his sister Mrs. Pamela Brennan of New Etham, London; along with his nieces and nephews. He was preceded in death by his father Edward Michael Doyle in 1964; mother Grave Violet Arnold Doyle in 1986; brother Michael Christopher Doyle 2005. Serving as pallbearers will be John Wilson, Jim Niemeyer, Bob Perry, Ansel Niemeyer, Dennis Cobb and Jay Nies. Serving as honorary pallbearers will be Chuck Madinger, Joe Lewis, Knights of Columbus and Ancient Order of Hibernians. Memorials may be made to the Ancient Order of Hibernians or the St. Clement School.

The family of Fr. Edward Anthony Doyle created this Life Tributes page to make it easy to share your memories.

Send flowers to the Doyle family.