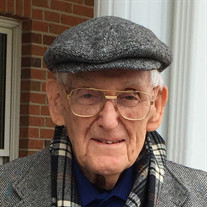 Edward E. Lawson, Sr. died on June 19, 2019 at Lynn’s Heritage House after a short period of declining health. He was born in Monroe City, MO, the son of Everett Lawson and Lillian (Jackson) Lawson. During his youth, he learned a variety of building skills while working for his Grandfather, Charles Lawson, and his Father. Skills he put to good use throughout his life. In 1941 he married Lola Mae Branstetter with whom he was married for over fifty years until her death in 1993. They had one son, Edward E. Lawson, Jr. and one grandson, Christopher Lawson. During the Second World War, he served with the 60th Seabees, a Navy Construction Battalion, in the South Pacific island campaigns for three years. Upon returning home he moved his family to Burlington, IA where he worked as an electrician and was active as a Mason and member of the First Baptist Church. Through hard work and study, Edward became an executive with the Iowa Southern Utility Company and in 1960 moved to its headquarters in Centerville, IA where he became the head of the purchasing department. Upon retirement, he and Lola Mae moved to Bowling Green to be close to her family where he commenced a second career by being active in community affairs which including being on the Boards of the Champ Clark House and the Pike County Memorial Hospital and serving as Alderman of the City of Bowling Green. In 1995 he married Charlene Boyd , who predeceased him in 2013, and thereafter became involved promoting tourism in Pike County as well as the the Clarksville Historical Museum. Edward had a love of reading which coupled with a strong sense of curiosity lead him to a lifetime of travel, exploring and learning . He will be remembered for his quiet nature, his courteous treatment of others, a love of story telling, and his willingness to contribute to the community. He is survived by his son, Ed Jr. of Belmont, NH and a grandson Christopher of Sammamish, WA. He is also survived by his half siblings Lynn Lawson, Wanda Matteson, and Nadine Hibbert. In addition, he is survived by stepsons John and Walter Boyd. There will be no visiting hours, but a memorial service will be held at the First Methodist Church in Bowling Green at 2:00PM on Friday June 28 with a reception thereafter. The family requests that in the spirit of Edward’s life and in lieu of flowers, contributions be made to The Champ Clark House, the New Harmony Christian Church of Curryville, the First Methodist Church of Bowling Green, Rotary Club of Bowling Green or your favorite charity.

Edward E. Lawson, Sr. died on June 19, 2019 at Lynn&#8217;s Heritage House after a short period of declining health. He was born in Monroe City, MO, the son of Everett Lawson and Lillian (Jackson) Lawson. During his youth, he learned a variety... View Obituary & Service Information

The family of Edward Lawson Sr. created this Life Tributes page to make it easy to share your memories.