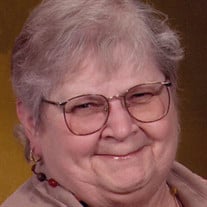 Elizabeth (Liz) Ann Halliburton, age 75, of Frankford passed away January 21, 2016 at the Hannibal Regional Hospital. Memorial Services will be held 2:00 p.m., Saturday, January 30, 2016 at the Bowling Green Presbyterian Church with Pastor Joe Siefkas. Cremation rites are under the direction of the Bibb-Veach Funeral Home. Liz was born November 22, 1940 in Denver, CO the daughter of Edwin Paul and Mildred Ethel Carter Steward. On August 1, 1959 in Lamar, CO she married William E. Halliburton. He survives. Other survivors include son William Paul Halliburton (Jennifer) of Overland Park, KS; three daughters Linda Elizabeth Raney (Ronald) of Palmyra, Jacquelyn Sue Andrews of Frankford, Sharon Kay Casper of Frankford; eleven grandchildren Erin Wilson, Wes Raney, Katlind Raney, Brian Gonzales, Samantha Gonzales, Justin Gonzales, Danielle Shoemaker, Meredith Halliburton, Ellis Halliburton, William Halliburton and Jackson Halliburton; eight great grandchildren; brother Charles Steward (Fan) of Longmont, CO and many nieces and nephews. She was preceded in death by her parents, brother Jack Steward and sister Imogene Steward. Liz grew up in Lamar, CO, graduating from High School there, spent time in Texas while her husband was in the service, and later moved to Frankford where she spent the past 39 years. She was a member of the Bowling Green Presbyterian Church. While living in Lamar she enjoyed sewing, being a square dance set mom, active with the Lamarlins swim team, the Jaycees, and worked at the Lamar Flower Shop. She also worked for the Bowling Green R-1 School District for 23 years retiring in 2001 and worked at the Bowling Green Flower Shop. Liz was a diehard Cardinals fan, and loved spending time in the mountains in Creede, CO at the family’s cabins but most of all loved being with her kids and grandkids. Memorials may be made to the American Cancer Society or the Bowling Green Presbyterian Church.

The family of Elizabeth (Liz) Ann Halliburton created this Life Tributes page to make it easy to share your memories.

Send flowers to the Halliburton family.