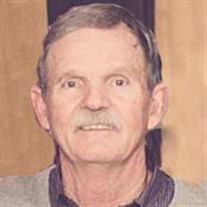 Eric Carson Kaser, age 66, of Frankford passed away February 27, 2017 at his home. Memorial services will be held 11:00 a.m., Saturday, March 4, 2017, at the Frankford Christian Church in Frankford. Visitation will be held 4:00 – 7:00 p.m., Friday, March 3, 2017 at the Frankford Christian Church. Eric was born July 29, 1950 in Hannibal the son of Gene Carson and Evelyn Heiser Kaser. On September 3, 1977 he married Susan Diane Whitfield at the St John’s Lutheran Church in Hannibal. She survives. Other survivors include three sons Louis (Lacey) Kaser of Platte City, Phillip Kaser (Mary) of Platte City, Brian Kaser (Joo-Won) of Chicago, IL; daughter Erin Kaser of St. Peters; six grandchildren Finley, Ellie, Tyler, Brody, Carson, and Kaylin Kaser; brother Alvin Kaser of Frankford; sister Phyllis Gustafson (Steve) of Belton; brother-in-law Steve Whitfield (Donna) of Springfield; sister-in-law Kim Evans of Jackson; many nieces, nephews and cousins. He was preceded in death by his parents. Eric grew up in Frankford and later moved to Hannibal and graduated from Hannibal High School. In 1973 he graduated from William Jewel College with a BS in Business and returned to the family farm. He was a deacon at the Frankford Christian Church and served 6 years on the BGR-1 Board of Education. He also served on the Farm Service Agency County Committee, Fairview-Frankford Cemetery Board and on the Rural Fire Department Board. Eric enjoyed golf, hunting, horseback riding and spending time with family and friends. Memorials may be made to the Frankford Christian Church, Fairview-Frankford Cemetery or the Frankford Fire Department.

The family of Eric Carson Kaser created this Life Tributes page to make it easy to share your memories.

Send flowers to the Kaser family.