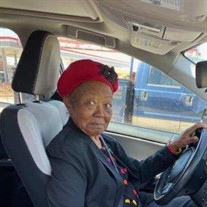 Estella Wynn Campbell, 76, of Frankford, passed away Tuesday, May 17, 2022 at DePaul Hospital in St. Louis. Funeral services for Estella will be held Friday, May 27, 2022 at 12:00 p.m. at Bibb-Veach Funeral Homes & Crematory in Bowling Green with Rev. Robin Terrell officiating. Burial will be in Green Ridge Memorial Park in Frankford. Visitation hours will be held Friday, May 27th from 10:00 a.m. to 12:00 p.m. at the funeral home. Estella was born February 12, 1946 in Mt. Bayou, Mississippi to Jerry and Arceal George Wynn. She was united in marriage to William Ray Campbell on April 17, 1966 in Frankford, Missouri. He preceded her in death on October 31, 2019. Surviving are sons, Richard Campbell II (Debby) of Leavenworth, Kansas, and Jason Christopher Campbell (Carl Mahon) of Ayer, Massachusetts; grandchildren: Simone Campbell, Jacqueline Diaz, Louis Hernandez, Patrick Simon, Melissa Simon, and Steven Simon; great-grandchildren: Andy Diaz, Alyssa Bonner, Olivia Bonner, and Nathaniel Simon; brother, George Williams; sisters: Ellen Jones, Bessie Bush, Linda Williams, Valerie Center, and Myra Oliveras; along with a host of nieces and nephews. Estella was preceded in death by her husband; and brothers: Patrick Williams, Paul Williams, and Carl Love. Estella was born in Mississippi. Her family moved to St. Louis when she was 8 years old. She resided in St. Louis until she and William married. William and Estella moved around often due to William’s military career; residing in New England, Germany, Maryland, and St. Louis. They moved back to Frankford in 1985 when Bill retired from the military. During her working years, Estella was employed as a manager for Churches Fried Chicken in Maryland and New England, and Pizza Hut in St. Louis, later selling insurance alongside her husband. Estella enjoyed reading in her free time, as well as cooking. She also loved to travel; especially enjoying the Bahamas, Branson, Las Vegas, Germany, and England. Estella enjoyed listening to all different kinds of music. She was a kind soul who will be greatly missed by all who were blessed to know her. Donations may be made to the Second Christian Church or Green Ridge Memorial Park.

Estella Wynn Campbell, 76, of Frankford, passed away Tuesday, May 17, 2022 at DePaul Hospital in St. Louis. Funeral services for Estella will be held Friday, May 27, 2022 at 12:00 p.m. at Bibb-Veach Funeral Homes & Crematory in Bowling Green... View Obituary & Service Information

The family of Estella Wynn Campbell created this Life Tributes page to make it easy to share your memories.

Send flowers to the Campbell family.