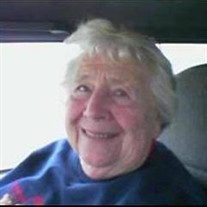 Eugenia (Jean) Fisher, age 89 of Curryville, completed her journey on earth Sunday, January 17, 2016 at the Willow Care Rehabilitation & Health Care Center in Hannibal. A Mass of Christian Burial will be held at 10:00 am on Wednesday, January... View Obituary & Service Information

The family of Eugenia (Jean) Fisher created this Life Tributes page to make it easy to share your memories.

Send flowers to the Fisher family.