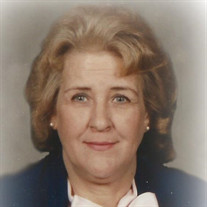 Evelyn Louise Roberts, 78, of Silex, entered her heavenly home at 10:48 a.m. on Monday, Aug 8, 2016, at Barnes-Jewish St. Peters Hospital with her family gathered around in loving support. A funeral mass will be held 11:00 a.m. on Saturday Aug. 13, 2016, at the St. Alphonsus Catholic Church in Millwood with Fr. Charles Tichacek officiating. Burial will be in the St. Alphonsus Cemetery. Visitation scheduled from 4:00 – 8:00 p.m. Friday Aug. 12, 2016, at the Knights of Columbus Hall in Millwood. She was born Feb. 27, 1938, to Harry Joseph and Althea Jane (Rattles) Wielms in the family home in Pendleton, MO. She attended Troy Buchanan High School and graduated in 1956. In 1973, Evelyn met her husband, Tom, who courted her on the dance floor for five years, before they began their wonderful marriage on Nov. 25, 1978. Sharing a passion for their church and community, Evelyn went on to volunteer her time for the betterment of both. For years she participated in organizing many fundraisers and community events such as the St. Alphonsus Sausage Dinner, Silex fall festival, and the Millwood Knights of Columbus Picnic. As a devout catholic, she also served on the St. Alphonsus Parish council, where she was instrumental in the starting of the Las Vegas Night events that produced substantial funds for the school and parish. Evelyn favored a plethora of hobbies, which included writing of poetry, gardening, and traveling. She had several adventurous trips with her family to Lake of the Ozarks, Hawaii, Canada, Florida, and Minnesota. She especially enjoyed boating at Mark Twain Lake with her friends and family. More than anything, Evelyn was passionate about spending time with the many people she cared about. She is survived by her five loving children: Janet, Tina, Sonya, Chris, and Tommy; 12 grandchildren: Drew, Amanda, Ashley, Grant, Kayleigh, Nicholas, Halle, Alex, Will, Kai, Teagan, and Mia; 2 brothers: Harry James Wielms and George Wielms; 2 sisters: Shirley Lenk and Kathy Rowe. She is preceded in death by her parents and loving husband Tom. Pallbearers will be Aaron Schwendemann, Shawn Gibson, Nicholas Kane, Alex Forbeck, Les Ellison and Hal Roach. She will be sadly missed and long remembered by all who knew and loved her. Memorials may be made to the Donor’s Choice.

Evelyn Louise Roberts, 78, of Silex, entered her heavenly home at 10:48 a.m. on Monday, Aug 8, 2016, at Barnes-Jewish St. Peters Hospital with her family gathered around in loving support. A funeral mass will be held 11:00 a.m. on Saturday... View Obituary & Service Information

The family of Evelyn Roberts created this Life Tributes page to make it easy to share your memories.