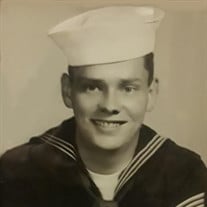 Everett Elliott Lovell, 85, of Bowling Green, passed away Wednesday, May 19, 2021 at his home. Funeral services for Everett will be held Monday, May 24, 2021 at 10:00 a.m. at Bibb-Veach Funeral Homes & Crematory in Bowling Green with Pastor Mike Dallas officiating. Burial will be in Green Lawn Cemetery with full military honors. Visitation will be Sunday, May 23, 2021 from 3:00 to 7:00 p.m. at the funeral home. Everett was born in Cyrene, Missouri on March 16, 1936 to Claude Mitchell and Margaret Virginia Smith Lovell. He was united in marriage to Carley Jean Lovell on May 9, 1969 at the Methodist Church in Vandalia, Missouri. She preceded him in death on October 7, 2019. Everett was raised in Cyrene and attended Cyrene School. He graduated Bowling Green High School in 1954. While in school, Everett was very active in the FFA. After graduation, he served in the U. S. Navy as a sonar specialist aboard the USS Saufley from 1954-1959. Upon returning home from the Navy, Everett worked at Missouri Hatchery with his father and later took ownership. He later moved the business and changed the name to Producers Farm Supply. In 1999, he retired to care for Carley. Everett was a lifetime member of the VFW #5553 in Bowling Green, where he had served as Commander for several years, a trustee, and also served on the Funeral Honors Board. Everett was also involved in the community, serving on the High-Rise Board and sponsoring his grandchildren’s sports teams. He loved to play pitch and cribbage every Monday night at the VFW. Some of his favorite pastimes were fishing and watching basketball; especially his granddaughter, Brandi’s team. He was also a fan of the St. Louis Cardinals and Mizzou sports. Everett was a member of the Methodist Church with Carley for over 50 years, and most recently a member of the Refuge Church. He thought manners were very important, and always said a prayer before every meal. Everett is survived by daughters Pam Tipton of Curryville and Lori Ann Kottwitz of Bowling Green; grandchildren Brandi Tipton-Smith and Greg Tipton II; great-grandchildren: Jacob Tipton, Jaelyn Smith, and Brody Tipton; and special cousins: Tom Smith, Mike Smith, Leo Kerns, Bill Kerns, Faye Inlow, Bob Hickerson, and Jim Lovell. He was preceded in death by his parents; wife; son-in-law, Greg Tipton on December 19, 2020, and great-granddaughter, Abigale Tipton on November 3, 2011. Pallbearers will be Tom Smith, Mike Smith, Junior Hubert, Tom Stewart, Doug Lovell, and Rick Lovell. Honorary pallbearers will be Milford Shephard, John Dikeman, Joann Eibert, Joyce Scherder, Dick LaBryar, Tom Marshall, Bill Baxter, Sharon VanHooser, and Faye Inlow. Memorials may be made to Pike County Home Health and Hospice, VFW #5553, Methodist Church, or the Refuge Church.

Everett Elliott Lovell, 85, of Bowling Green, passed away Wednesday, May 19, 2021 at his home. Funeral services for Everett will be held Monday, May 24, 2021 at 10:00 a.m. at Bibb-Veach Funeral Homes & Crematory in Bowling Green with Pastor... View Obituary & Service Information

The family of Everett Elliott Lovell created this Life Tributes page to make it easy to share your memories.

Send flowers to the Lovell family.