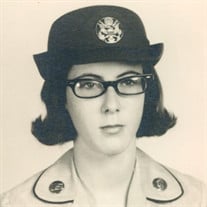 Frances L. Mangus passed away on November 21, 2019. Frances was born August 3, 1947 to Marion W. and Myrtle M. Griffith Gillum in Louisiana, Missouri. They preceded her in death. Fran, as she was known to many, graduated from Bowling Green High School with the class of 1965. After graduation she attended Hannibal Public School of Practical Nursing. In 1968, she moved to Texas and in 1969 Fran joined the United States Army. After her discharge in 1970, she returned to Bowling Green and worked for several years. In 1973, Fran joined the United States Air Force. She was honorably discharged in 1982. While stationed at Scott Air Force Base in Illinois, Fran met and married Larry E. Mangus on February 22, 1974 in Belleville, Illinois. They later divorced. After her discharge and the retirement of her husband, they moved to Walkerton, Indiana. While living there, Fran attended Indiana Vocational Technical College in South Bend, Indiana, following which she was employed with the IRS. She was later employed by General Telephone and Electric in LaPorte, Indiana and transferred to GTE in Wentzville, Missouri. While working in Wentzville, Fran married Robert A. Paul, Jr. of LaPorte, Indiana in Bowling Green on September 27, 1996. She resigned from GTE in 1998 to join her husband in Indiana. They eventually returned to Walkerton, Indiana in 1999. Larry preceded her in death in 2009 and Bob preceded her in 2013. Her sisters also preceded her in death; Marian M. Sharp of Texas City, Texas in 1992 and Nancy E. Edwards of Bowling Green in 2008. Fran is survived by her son, Scott (Alana) Mangus of Indiana, four step-sons; David (Lisa) Paul of Louisville, Kentucky, Christopher (Susan) Paul of Carmel, Indiana, Robert A. Paul III of Henderson, Nevada and Michael (Tammy) Paul of Ft. Wayne, Indiana, along with 12 step-grandchildren, nieces, nephews and cousins. Fran was a life member of American Legion Post #400, American Legion Auxiliary Unit #400 in Fish Lake, Indiana, life member of VFW Post #1954 in North Liberty, Indiana, life member of DAV Post #23 in Michigan City, Indiana, life member of AMVets Post #911 of Rolling Prairie, Indiana and DAR in Bowling Green. Per her wishes, there will be no visitation or services. Fran’s burial will be at Jefferson Barracks National Cemetery, St. Louis, Missouri on Monday, November 25, 2019. Pallbearers will be Chris Tophinke, Mike Lewis, Rick Edmond and Matt Myers. Arrangements are being handled by Bibb-Veach Funeral Home.

Frances L. Mangus passed away on November 21, 2019. Frances was born August 3, 1947 to Marion W. and Myrtle M. Griffith Gillum in Louisiana, Missouri. They preceded her in death. Fran, as she was known to many, graduated from Bowling Green... View Obituary & Service Information

The family of Frances Lorene Mangus created this Life Tributes page to make it easy to share your memories.

Send flowers to the Mangus family.