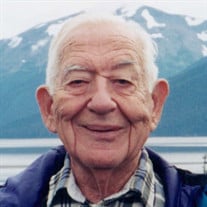 Rev. Francis McGiverin Derick, age 105, of Aurora, CO formerly of Bowling Green passed away May 5, 2016. A Memorial Service will be held 1:30 p.m., Saturday, June 11, 2016 at the Providence Presbyterian Church in Vera with Rev. Randall Cone officiating. Military honors will be given by the VFW Post #5553 and Missouri Military Honors. Visitation will be Saturday from 12:30 pm until time of service at the church. Francis was born September 6, 1910, in Bellwood, PA the son of Charles Timothy and Daisy McGiverin Derick. He graduated from Juniata College, Huntingdon, PA in 1935 and from McCormick Seminary, Chicago, IL in 1941. He was united in marriage to Georgia Weurding April 23, 1941 in Chicago. She preceded him in death. Survivors include daughters Ruth Ann Whittenberg (Orby) of Fulton, and Darlene Ward of Aurora, CO; grandchildren Audrey Whittenberg, Kelly Whittenberg (Rachel), Derick Ward (Cheryl) and Elizabeth Morrone (Joe); great grandchildren Veronica and Victoria Whittenberg. Francis served in the United States Army from 1936-1937, stationed in the Panama Canal. He was ordained on June 30, 1941 in Troy Grove, IL. He served five pastorates in thirty eight years and retired in Bowling Green in 1978. He was a member of Phoenix Lodge #136 A.F. & A.M. in Bowling Green. He loved people, gardening, trains and baseball. Memorials may be made to Providence Presbyterian Church, Antioch Presbyterian Church or the Concord Cemetery.

The family of Francis McGiverin Derick created this Life Tributes page to make it easy to share your memories.

Send flowers to the Derick family.