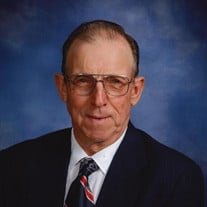 Francis Neil Norton, 82, of Silex, passed away on his farm in Louisville, Missouri on August 3, 2021. Neil was born in Troy, Missouri on December 18, 1938 to Frank and Mamie (Neumann) Norton. He joined the Army Reserves in 1956, completing basic training at Fort Leonard Wood, Missouri, and was stationed at Fort Ord, California. Neil was united in marriage to Carol Joyce Preul on December 28, 1971 at the priest’s home in Millwood, Missouri. To this union one daughter, Stephanie Anita Norton, was born. Neil is survived by his wife, Carol; daughter, Stephanie and fiancé, Steven Hill of Marthasville, Missouri; sister, Wanda (Norton) Stilwell of Lake St. Louis, Missouri; nephew, Gordon Stilwell of New Melle, Missouri; great-nephews, Drew and Spencer Stilwell; and many dear cousins and friends. Neil was preceded in death by his parents, Frank and Mamie; and nephew, Robert Dale Harmon. Neil loved his life-long occupation of farming; enjoying raising hogs and cattle, and watching the crops grow. Neil enjoyed hunting pheasants in South Dakota with his cousins, quail hunting with friends, and dove hunting with later generations of his family. Hunting pals have shared many stories of his hunting dogs, King and Ace, and of Neil’s shooting skills. Along with his wife and nephew, Neil deer hunted at the property in Louisville. Neil loved and spent many hours at his property hunting deer and turkey, both with gun and bow, maintaining riding trails and food plots, and sitting and watching deer until sunset. When not farming and hunting, Neil enjoyed boating and crappie fishing at Mark Twain Lake. Visitation for Francis Neil Norton will be Sunday, August 8, 2021 at Bibb-Veach Funeral Home in Silex from 4:00 to 7:00 p.m. A Mass of Christian Burial will be held Monday, August 9, 2021 at 10:00 a.m. at St. Alphonsus Catholic Church in Millwood, with Fr. Charles Tichacek officiating. Burial will be in St. Alphonsus Cemetery. Memorials may be made to St. Alphonsus Cemetery.

Francis Neil Norton, 82, of Silex, passed away on his farm in Louisville, Missouri on August 3, 2021. Neil was born in Troy, Missouri on December 18, 1938 to Frank and Mamie (Neumann) Norton. He joined the Army Reserves in 1956, completing... View Obituary & Service Information

The family of Francis Neil Norton created this Life Tributes page to make it easy to share your memories.

Francis Neil Norton, 82, of Silex, passed away on his farm in...

Send flowers to the Norton family.