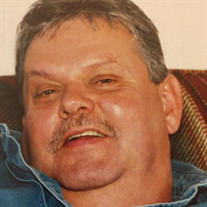 Francis Charles Young, age 70, of Bowling Green, passed away Friday, August 30, 2019 at the University of Missouri Hospital in Columbia, MO. Funeral services will be held at 10:00am on Wednesday, September 4, 2019 at the Bibb-Veach Funeral Home in Bowling Green with Rev. Laura Beth Fisher Zen officiating. Burial will be in the Memorial Gardens Cemetery. Visitation will be held from 4:00pm until 8:00 pm on Tuesday at the funeral home. Francis was born May 15, 1949 in Curryville, MO, the son of Freddie Orville and Mary Frances Goree Young, Sr. He attended and graduated in 1968 from Clopton High School, where he held a school record in pole-vault for many years. Upon graduation he was drafted into the United States Army on May 26, 1969 and was honorably discharged January 8, 1971, at which time he served another four years in the reserves. Francis lived in Pike County all of his life, except for a period of time he lived in Germany during his time in service. Francis is survived by his son Joshua Young of Bowling Green; mother Frankie Branstetter of Bowling Green; three grandchildren Alissa Rose, Forrest Charles and Morgan Angela Young; great-grandson Wyatt Charles Young; brothers Freddie Young Jr. of Bowling Green and Evert Young of Griggsville, IL; sister Sharon Hasty of New London; step-siblings Marion Branstetter (Jackie) of Curryville and Deborah Kraft (Allen) of Curryville; nieces, nephews and extended family. He was preceded in death by his father; brother Paul Young; step-father Joe Branstetter. Francis worked for 33 years as a fork lift operator for Hercules Chemical Co. He loved going to yard sales and flea markets and was an avid John Deere collector. Francis was known as a jokester and enjoyed making other people laugh. He enjoyed watching sports in television, especially college football and the Olympics. He will be truly missed by all that knew him. Serving as pallbearers will be Bill Unsell, Steve Lamberson, Junior Riffle, Jack Gumm, Gary Purk and Alvin Davis. Memorials may be made to the family in care of the Bibb-Veach Funeral Home.

Francis Charles Young, age 70, of Bowling Green, passed away Friday, August 30, 2019 at the University of Missouri Hospital in Columbia, MO. Funeral services will be held at 10:00am on Wednesday, September 4, 2019 at the Bibb-Veach Funeral... View Obituary & Service Information

The family of Francis Charles Young created this Life Tributes page to make it easy to share your memories.

Send flowers to the Young family.