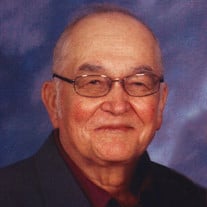 Frank Lee Holcumbrink, age 92, of Bowling Green, went home for Christmas in the early hours of Christmas Eve, December 24, 2020. Funeral services will be held at 11:00 am Tuesday, December 29, 2020 at the Bibb-Veach Funeral Home in Bowling Green, MO with Rev. Jerry Gamm officiating, with Military Honors being conducted by VFW Post #5553 and Missouri Military Honors. Burial will be in the Curryville Cemetery. Visitation will be held from 10:00 am until time of services. At the families request, masks are recommended for attending services and will be available at the door. Frank was born March 25, 1928 at his home in Annada, MO, the son of Ernest and Jessie Crouse Holcumbrink. He married Bonnie Johnson February 12, 1955 by Rev. John Hall. Survivors include his wife Bonnie of Bowling Green; daughters Barbara Hagemeister (Ron) of Republic, MO and Brenda Haddock of Bowling Green; sister Jo Ann Raney (Larry); grandchildren and great grandchildren. He was preceded in death by his daughters Debora Holcumbrink and Kathy Crawford; parents; siblings Ernest William Holcumbrink, Lenora Miller, Mary Craig, Barney Holcumbrink, and Lena Carroll; son-in-law Boyd Haddock. Frank attended school in Annada growing up. He joined the United States Army and served in Korea during the Korean War in the Army 7th Armored Division Infantry, receiving a Purple Heart. After returning from service and marrying the love of his life, Frank and Bonnie raised their four daughters on the family farm purchased in 1966 and from which they retired in 1997. Frank was a man of great faith and was a member of Curryville Baptist Church. He was well known for giving of his time to help neighbors and others. He was talented in building and woodworking whether it was a farm building, piece of furniture, or a craft. In later years, he loved reading and cooking. He was known for baking a delicious twinkie cake which was his secret recipe. He loved dogs and had many faithful pets since childhood, most recently Queenie, his shih tzu. Serving as honorary pallbearers will be Kenny McCarthy, Robert Wallace, Rick Worley, Floyd “Chub” Dameron, Debbie Pease, Bruce Scherder, Betty Scherder, and Gary Schwenk. Memorials may be made to Pike County Hospice or the Curryville Baptist Church.

Frank Lee Holcumbrink, age 92, of Bowling Green, went home for Christmas in the early hours of Christmas Eve, December 24, 2020. Funeral services will be held at 11:00 am Tuesday, December 29, 2020 at the Bibb-Veach Funeral Home in Bowling Green,... View Obituary & Service Information

The family of Frank Lee Holcumbrink created this Life Tributes page to make it easy to share your memories.

Send flowers to the Holcumbrink family.